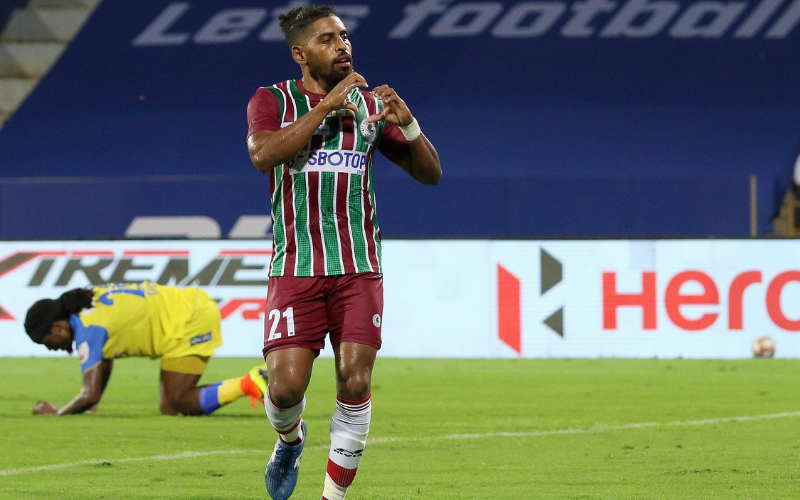 ISL 2020-21: Krishna's goal holds up as ATKMB shuts out Kerala Blasters in opener

Newly-merged ATK Mohun Bagan kicked off their 2020-21 Hero Indian Super League campaign with a win on Friday, beating Kerala Blaster 1-0 at GMC Stadium in Bambolim, Goa. Roy Krishna got the only goal in the second half.

Newly-merged ATK Mohun Bagan marked their entry into the Hero Indian Super League in style as they secured a 1-0 victory over Kerala Blasters at the GMC Stadium in Bambolim, Goa on Friday. Roy Krishna scored the only goal of the game in the second half to bag the three points for his side.

The first half was a cagey affair and remained goalless, with ATKMB failing to convert their chances. Kerala dominated possession but lacked the end product in the final third.

It was Kerala who started brightly, intent on keeping the ball while Kolkata side were keen on absorbing the pressure.

The Mariners had the chance to take the lead off what was the first corner of the game, with the ball falling to an unmarked Krishna. The Fijian though failed to get the desired connection and scuffed it out for a goal-kick.

ATKMB were forced to make their first substitution in the 15th-minute when Michael Soosairaj was stretchered off the field after being fouled by Prasanth Karuthadathkuni. He was replaced by Subhasish Bose.

Bagan had the opportunity to put themselves ahead, through a corner again soon. Edu Garcia found Carl McHugh but the Irishman fired his header wide. Krishna had another great chance soon after the half-hour mark, with the ball falling to him after a mistake by Vicente Gomez. However, the Fijian blazed his shot over the bar.

Shortly after that, Kerala had their best chance of the game. Nongdamba Naorem whipped in a cross from the left but a block from McHugh lobbed off towards the centre of the box. An onrushing Ritwik Das, however, missed the target from close distance.
Vicuna's men continued to dominate possession in the second half and their efforts led to a clear-cut opportunity. Carneiro burst forward and crossed the ball to Sahal Abdul Samad, who miscued his shot.

The deadlock was finally broken in the 67th minute due to a mistake by the Kerala defence. Sergio Cidoncha and Jose Vicente Gomez made a mess of clearing Manvir Singh's lobbed ball and succeeded only in diverting it into Krishna's path. The Fijian made no mistake, scoring Bagan's first goal of their ISL sojourn.

Kerala pushed hard for an equaliser, bringing on Puitea and Jordan Murray, but were eventually let down by their poor finishing.