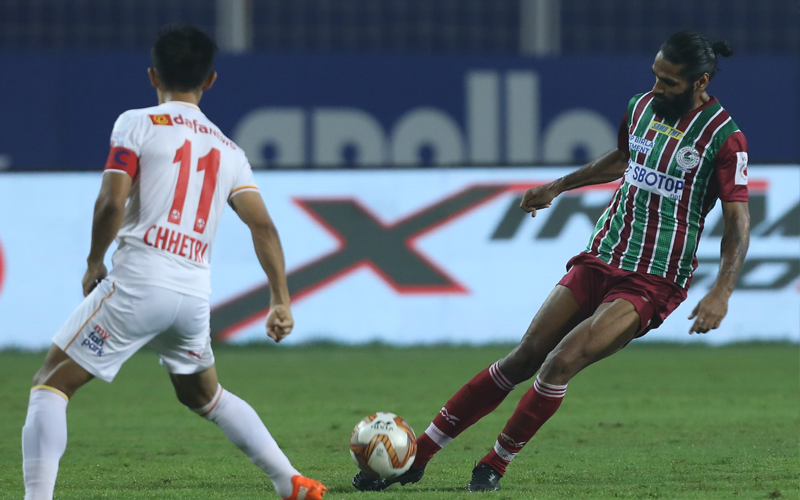 David Williams’ 33rd-minute strike proved the difference as ATK Mohun Bagan got the better of Bengaluru FC in the Hero Indian Super League at the Fatorda Stadium, on Monday.

The Australian scored his first goal of the campaign with a stunner which was enough to inflict on Bengaluru, their first defeat of the season.

The win took the Kolkata side level to 16 points from seven matches, the same as Mumbai City FC. Bengaluru stayed third with 12 points.

ATKMB looked threatening from the start and had good opportunities to convert their dominance into goals. But Manvir Singh saw both his efforts easily saved by the keeper during the first quarter.

In the 11th minute, Subhasish Bose drilled in a low cross for Manvir, who got the better of Bheke. But his first-time shot was easily caught by the keeper Gurpreet. His second attempt was set up by Garcia with a sublime through ball, which was also dealt with by the Bengaluru keeper. Sunil Chhetri did test Arindam Bhattacharja but it went straight to the ATKMB custodian.

ATKMB deservingly took the lead at the half-hour mark. David Williams finally opened his account this season with a stunning goal, displaying composure and class. Carl McHugh found Williams with a long ball, which the latter controlled with an excellent first touch. The Australian created room, getting into the middle of the park before firing a shot into the top-right corner. Gurpreet couldn’t get his hand to the ball despite diving full length.

A 💥 strike which sealed the victory for @atkmohunbaganfc ✌️

The home side resumed from where they had left off and Williams nearly doubled the lead early on in the second half. Roy Krishna showed his strength on the left and made a run inside the box and set up Williams. But the Australian’s attempt narrowly sailed over the bar.

Bengaluru had a glorious chance to restore parity in the 73rd minute. A poor goal-kick from Arindam set BFC on the attack. Leon Augustine found Suresh Wangjam on the right side and the latter cut it back to Cleiton Silva. Silva should have scored from touching distance but instead shot wide. At the other end, Gurpreet came up with another fine save to deny Manvir.

Bengaluru pushed hard for the equaliser but the ATKMB defence was at their best, as they helped their team hold on to the one-goal advantage.