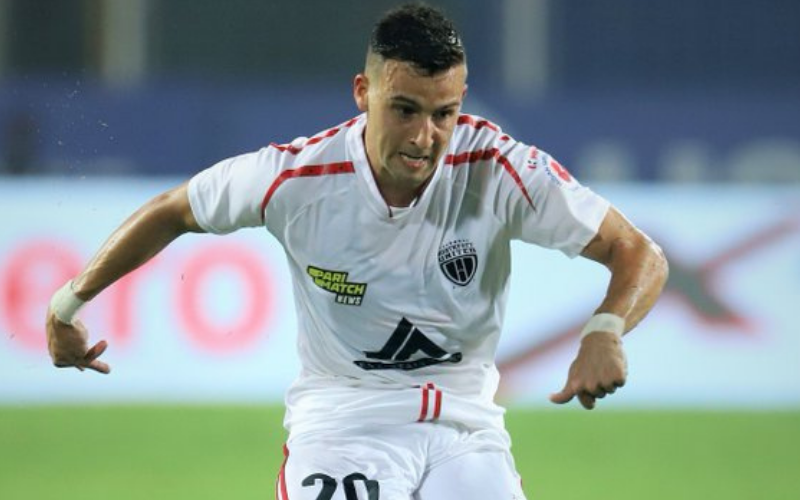 ISL 2020-21: Machado at the double as NorthEast United gut out gritty 2-2 draw against Bengaluru FC

It was an action-packed fixture from start to finish. Bengaluru FC and NorthEast United split the points after playing out a pulsating 2-2 draw at the Fatorda Stadium.

Gerard Nus' men took an early lead through a fortuitous strike from Luis Machado (4') but Bengaluru hit back through Juanan (13') and substitute Udanta Singh (70').

Just as the Blues looked set for a win, Machado (78') struck again to ensure his team got a share of the points.

NEUFC got off to the best possible start when they scored in just the fourth minute. Rochharzela cut into the box and unleashed a shot at goal. His strike struck his teammate Machado and Bengaluru goalkeeper Gurpreet Singh Sandhu could only look on in despair as the ball looped in.

But rather than be pegged down by the early goal, Bengaluru responded with a flurry of attacks and eventually found their equaliser, NEUFC's lead lasting just over ten minutes. A Rahul Bheke throw caused all sorts of chaos in the NEUFC box and it fell to Juanan, whose first-time shot found the net.

Bengaluru had a number of chances to take the lead in the first half and their coach Carles Cuadrat would have been rather displeased that they did not do so. Ashique Kuruniyan, in the 19th minute, fired wide after a terrific run. Seven minutes later, Harmanjot Khabra found himself inside the box with an open sight on goal. but his shot went wide as well. NEUFC went close towards the end of the first half as Gurpreet had to stretch to keep a Machado freekick out. But it was Bengaluru who dominated the half and their 62 percent possession in that period was a testament to that.

Machado again a thorn for the Highlanders

The Blues started the second half in the same way as they had ended the first — hogging possession, creating chances and failing to take them. But they finally had their lead in the 70th minute and it was some lax defending from the Highlanders that led to it. Sunil Chhetri won a header at the edge of the box and directed it towards the far-post. Dylan Fox should have cleared it but let it roll into the path of the onrushing Udanta, whose shot crept in under goalkeeper Gurmeet's hands. On the touchline, Cuadrat appeared ecstatic.

However, his joy was not to last long as Bengaluru's lead lasted just under eight minutes. Juanan went from hero to villain as his failure to deal with a ball from midfield allowed Machado to slot past Gurpreet and grab the equaliser.

The goal led to a frenetic final quarter with both teams getting chances to score a winner. But neither managed a goal and they left the field with a point each.