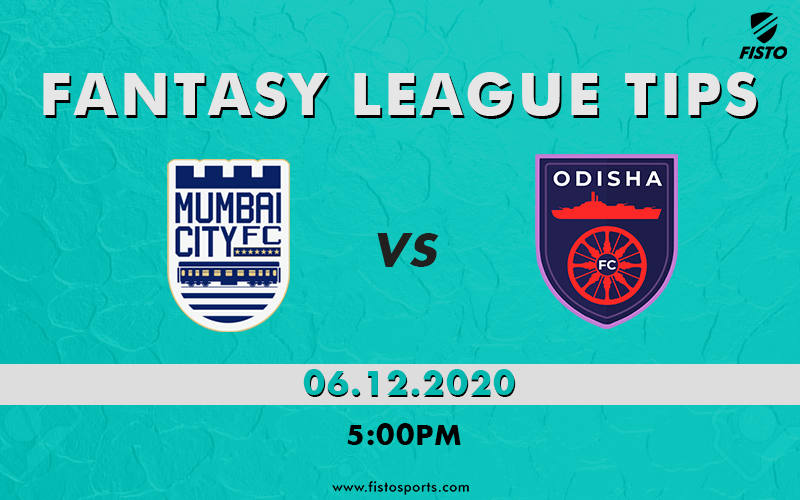 Get all the tips, predictions and updates you need to whip your team into shape ahead of MCFC vs OFC of the Hero ISL Fantasy League 2020.

After an unexpected loss against North East and an unimpressive win against the 10-men FC Goa, they finally got their season "Rock and Rolling" after their 3-0 trashing against SC East Bengal. Whereas, Odisha FC has found themselves in a spot-on bother after conceding against ATK Mohun Bagan as late as the 4th additional minute. They are yet to win a match and playing against Mumbai City FC won't help their cause either.

So, now let's look at Fisto's Fantasy 11 Team Tips and Predictions for this match.

Kamaljit Singh (OFC) : We are expecting Mumbai City to boss the game and have a lot of shots on target. So, we are taking Kamaljit as our Goal Keeper.

Mourtada Fall (MCFC): He is a tall centre-back who is capable of scoring goals. He is a leader at the back. Fall has the unique record of Defenders with most goals in ISL history.

Mandar Rao Desai (MCFC) : Another player who is so good in both defense and attack. He played as a Left winger in the last match but didn't get much chance to shoot. He will be an important player in our side to earn points.

Anthony Taylor (OFC) : Probably the only Odisha defender who has been consistent in their three matches so far. He is a great leader for the side as well. His experience is what helps us to earn more points in the Fantasy football.

Hugo Boumous (MCFC): There is no need for justification to taking him in our squad. The player with most assist in ISL History and also attempts to score some goals on his own as well.

Ahmed Jahouh (MCFC): He has been the key player for Lobera over the years. With Jahouh in the pitch, the team look even more confident. He is an engine to the Mumbai City FC.

Cole Alexander (OFC) : He impressed against ATK Mohun Bagan. He was playing as a centre-defensive midfielder and did that role ever so perfectly. Also contributed in few attacks as well.

Marcelinho Leite (OFC) : Probably the most successful player in Hero Indian Super League. He is always the key player for any side he plays. He is yet to show his best this season, but we all know it's not far away.

Diego Mauricio (OFC) : Scored a brace coming off the bench against Jamshedpur FC. But he is yet to contribute while starting for his team. Nevertheless, he is an important player if Odisha has to score some goals.

Adam Le Fondre (MCFC) : He has 3 Goals to his name already. Although out of the three, two were penalties and was a simple tap in, it's his ability to be in the free space that makes him a goal scoring machine. He would love to increase his goal tally further more today.

Note : The Fisto's Fantasy 11 is based on Predictions and analysis from the previous matches and Fisto Sports won't take any responsibility if the Selected team doesn't perform well. The Team Selection can vary depending upon the Starting 11 of the teams as well.