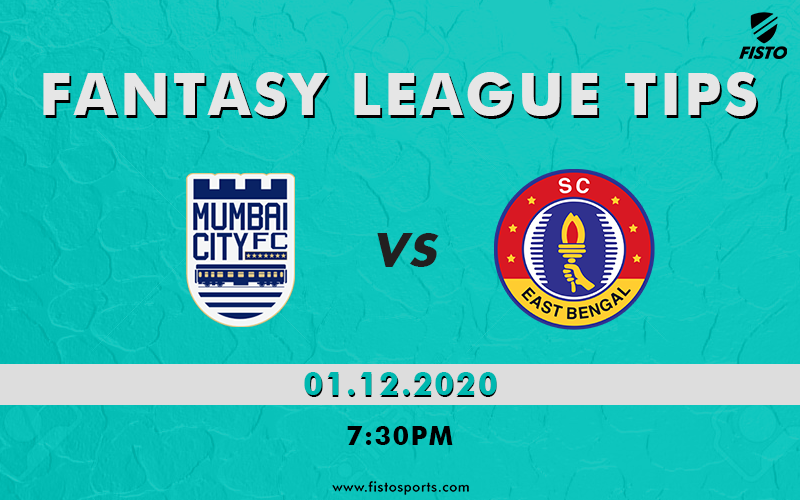 Let’s dig deep to find the players you should pick in Fantasy ISL for this Tuesday’s clash between Mumbai City FC and SC East Bengal.

Those who misjudged your players: Don’t worry, that is where Fisto Sports jumps in to guide you along the journey every day and provide the best possible players to scout.

It is match 13 of Hero ISL and Mumbai City FC taking on the league debutants SC East Bengal, in what will turn out to be an amazing contest to watch out, for the neutrals. East Bengal didn't have a memorable debut to their ISL Campaign as they lost 2-0 to their arch rivals ATKMB, whereas Mumbai City secured a last-minute penalty win against FC Goa.

As much as possible, let’s focus on maximum points to climb the fantasy league table against rivals. Here are the picks to help you:

Debjit Majumder (EB): We expect Mumbai City FC to take more shots on target considering their fire power in their attack and thus, we are Going with Debjit in between the sticks.

Both the teams have a set of solid defenders and it will be an interesting battle for both the teams to break the defense of another.

Moutarda Fall (MCFC): This tall centre-back has the unique record of "most goals scored by a defender in Hero ISL". He is tall and strong to keep the opponent attackers at the bay.

Danny Fox (EB): Although East Bengal conceded twice, Fox had a decent match against ATKMB. He is also the set piece target for the Robbie Fowler led team.

Sarthak Golui (MCFC): He was a good defender for Mumbai last season, as he did many timely interceptions, tackles and clearances. He didn't have a great game so far, but was decent enough to keep a clean sheet against FC Goa. He is also famous for picking up cards, so don't be surprised if he picks up one in this match as well.

Sergio Lobera led side has one of the best midfielders in this tournament and it's going to be an uphill task for East Bengal to Boss this area of the game.

Hugo Boumous (MCFC): The Golden Ball winner from the last season. Undoubtedly, the best attacking midfielder available in the league as well. Yet to contribute to the team goal wise, but it won't take much longer for him is what we feel.

Anthony Pilkington (EB): He is the main creator for SC East Bengal. As we saw in the match against the champions ATKMB, Pilkington was the player who was involved in every attack of the East Bengal.

Maghoma (EB): He created three great chances for the East Bengal last match, and he would like to do the same against Mumbai City as well. Also, he wasn't hesitating to take some shots as well.

Rowlin Borges (MCFC): The best midfielder for Mumbai City FC in their two matches so far. His tackles and Interceptions are always clean and top notch.

Mumbai clearly have the best attack in the league with the names of Adam Le Fondre and Bartholomew Ogbeche, whereas, East Bengal are yet to get their captain Jeje Lalpekhlua fit to play.

Adam Le Fondre (MCFC): Coming into league with a reputation of scoring 21 Goals for Sydney FC in the A-League last season, he is yet to find his scoring touch in this season's Hero ISL. He converted the penalty with brute power to earn his side the 3 points against FC Goa.

Jeje Lalpekhlua (EB): He is the second most Indian top-scorer in the league, only after Sunil Chhetri. He is a must have player in our fantasy 11, if he starts against Mumbai City FC.

Take a look at our Fisto's preview for this match in our Fisto Sports YouTube Channel.

Note: The Fisto's Fantasy 11 is based on predictions and analysis from the previous matches and Fisto Sports won't take any responsibility if the selected team doesn't perform well. The team selection can vary depending upon the starting 11 of the teams as well.