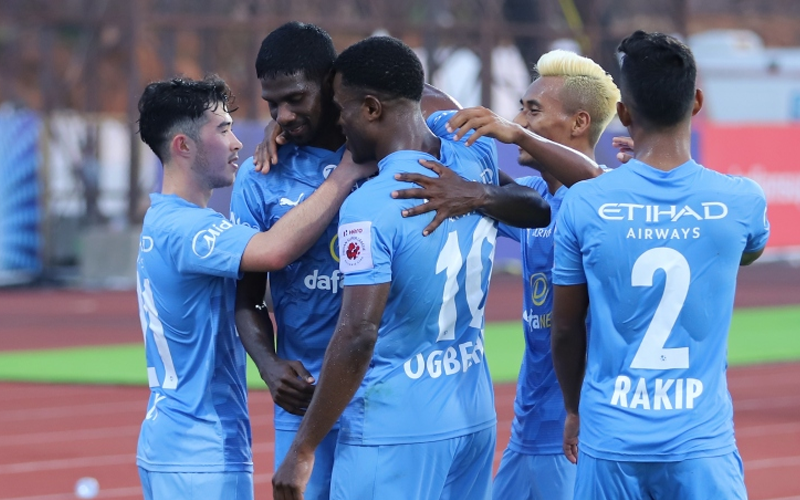 Mumbai City FC continued their impressive start to the Hero Indian Super League Season 7 with a 2-0 victory over Odisha FC at the GMC Stadium, Bambolim on Sunday.

A penalty from Batholomew Ogbeche (30') and a header from Rowllin Borges (45') gave Sergio Lobera's men their third win in four games and their first-win ever over Odisha in the league. The win sent them top of the table, level on points with ATK Mohun Bagan, albeit with a better goal difference. For their opponents, this was their third loss in four games and only point-less SC East Bengal lie below Stuart Baxter's side.

Mumbai predictably started the game spraying around passes and enjoying most of the ball. But it was Odisha who enjoyed the first real chance of the match, in the fourth minute, when Diego Mauricio's freekick clipped the top of the crossbar. But that was about as good as it got for Odisha in the first half.

Mumbai's first clear-cut opportunity came in the 18th minute when Ahmed Jahouh found Cy Goddard down the right. Goddard only had keeper Kamaljit Singh to beat but his shot went over the bar.

Twelve minutes later though, Mumbai had their goal. Vignesh Dakshina Murthy's attempted cross from the edge of the box struck Shubham Sarangi's hand and the referee promptly pointed to the spot. Ogbeche stepped up and fired a low shot to the left, which a diving Kamaljit could not get his fingers to. It was the third penalty Odisha had conceded this season and the second mistake that Sarangi had committed, which had led to a goal.

Just four minutes later, Mumbai thought they had scored again when Mourtada Fall headed in Jahouh's freekick at the far-post. However, the referee disallowed the goal, adjudging that there had been a foul on keeper Kamaljit. The latter, who fell awkwardly, was substituted after a suspected concussion and Odisha's reserve keeper Ravi Kumar came on in his stead.

Hugo Boumous missed a great chance to score in the 43rd minute, firing wide from Bipin Singh's pass. But Mumbai had their second a couple of minutes later. Bipin, again, fired in a great cross into the box which Borges headed past Kumar.

Mumbai had ended the first period with 62 percent of the possession and the second half saw more of the same. Odisha managed to create precious little save a couple of freekicks and a few corners. In the end, it turned out to be a comfortable win for Mumbai.