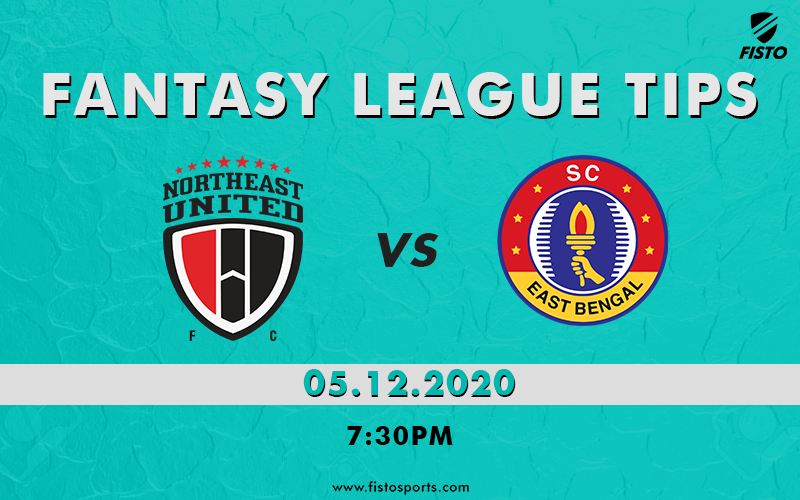 Agonising over who to pick? And when to bench them? Don't worry we have got you covered.

We are entering the third week of the Hero Indian Super League and we had an exciting two-weeks of football already. Today, we have, the battle of the east. It is SC East Bengal taking on the North East United F.C at the Tilak Maidan stadium in Vasco.

East Bengal are yet to open their points tally whereas North East United had a couple of draws to their name after an unforgettable victory against Mumbai City FC. Now let’s discuss about the Fisto's Fantasy 11 Tips and Team for this match.

Debjit Majumder (EB): East Bengal's defense looks shattered and Debjit will surely be called into the action a lot of times today.

Dylann Fox ( NEUFC): He has been perfect at the back for NorthEast United so far. He, along with his centre-back partner Benjamin Lambot are making it tough for the opposition to break their defense.

Benjamin Lambot ( NEUFC): Solid as a rock at the back. He is also the set piece target for North East United F.C as well.

Scott Neville (EB): East Bengal has conceded 5 goals so far. But the Aussie center-back was still decent in both their games. He can be a effective player during set pieces as well.

Matti Steinmann (EB): He is very influential for East Bengal side. He is very important in the defense - attack transition for them. He has been one of the few lone bright spots for the SC East Bengal so far.

Jacques Maghoma (EB): He is a very fast and physical winger. He is not hesitant to take some shots on target as well. Also helps out in the defense.

Anthony Pilkington (EB): The main creator of SC East Bengal. If goals are about to come for the team from Kolkata, it is most likely involving him. He Has recorded 3 Shots on target in both of their games so far.

Lalengmawia (NEUFC): Also known as "Apuia". The Youngest ever player to captain a ISL side. He is a youngster with so much technical ability. Does a lot of tackles and Interceptions In the match and also takes a few shots if he gets a chance to shoot.

Khassa Camara (NEUFC): He looks and plays like "Ngolo Kante". He is technically gifted. He, along with Apuia, were able to stop most of their opponents attacks so far.

Idrissa Sylla (NEUFC): Scored a goal against the Kerala Blasters and he is the penalty taker if Appiah doesn't start. Can expect a few goals from him.

Luis Machado (NEUFC): If Apuia and Camara for defense, then it's Machado And Sylla for attack for North East United. The left winger delivers amazing crosses into the box and also creates a lot of great chances. A must to have player in any fantasy side.

Note : The Fisto's Fantasy 11 is based on Predictions and analysis from the previous matches and Fisto Sports won't take any responsibility if the Selected team doesn't perform well. The Team Selection can vary depending upon the Starting 11 of the teams as well.