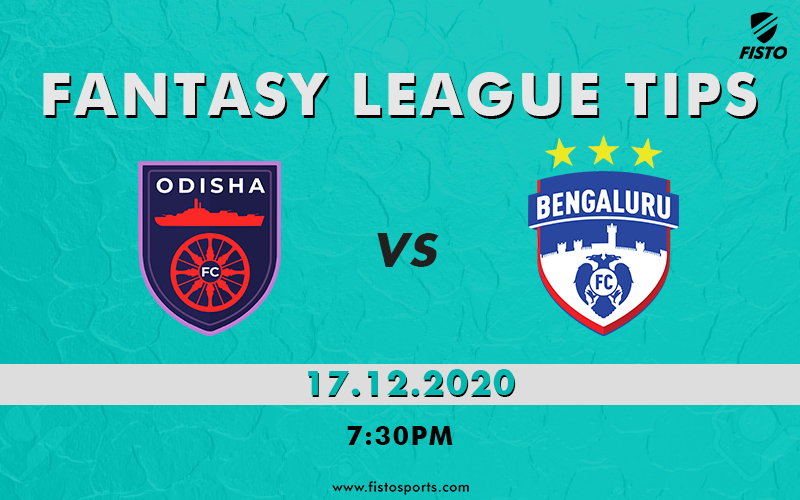 Let’s dig deep to find the players you should pick in Fantasy ISL for today's clash between Odisha FC and Bengaluru FC.

It is match 31 of Hero Indian Super League in which Odisha FC takes on Bengaluru FC at GMC stadium in Bambolim.

Bengaluru FC is still unbeaten in the tournament and are sitting prettily with 9 points in 4th position. On the other hand, Odisha FC is struggling for form and are desperately looking for their first win of this year's campaign.

Can Odisha Find their first win today? Or will bengaluru FC continue their unbeaten run? We will find out tonight.

Let's look at the Fisto's Fantasy 11 Team and tips for Today's match.

Arshdeep Singh (OFC): You can't omit a goal keeper who made 9 saves in his last game. Arshdeep was phenomenal against FC Goa, and we expect him to do the same again today.

Juanan(BFC): He is a goal scoring defender. He already has 2 Goals to his name. Bengaluru FC is a team famous for its goals from set-pieces and Juanan is one of their primary target for them. He is so strong defensively as well.

Harmanjot Khabra (BFC): He isn't a goal scoring threat like Juanan, but he brings even more value while defending. He earns points for interceptions, tackles and clearances and its relatively high. Also, we expect BFC to keep a clean sheet, so he will also get a clean sheet bonus.

Steven Taylor (OFC): The captain of Odisha FC and is doing his job quite well we must say. Yes, they are bad defensively so far but Taylor makes up for it by doing a lot of clearances and tackles.

Dimas Delgado (BFC): Undoubtedly, Bengaluru FC are performing better after his arrival into the starting line-up. He Had the most chances created for Bengaluru FC last season, and he is already doing the same this season. His set piece delivers are amazing as usual.

Cleiton Silva (BFC): He is one of the important players for Bengaluru FC. Just like Dimas, he creates a lot of opportunities and takes the set piece duties at times. He is also a proven finisher and he has 2 goals to his name.

Cole Alexander (OFC): The brightest spot among the tired midfield of Odisha FC. He creates many opportunities and also helps in defending as well. Takes some wild shots at times.

Marcelinho Leite (OFC): Player with second most number of assists in ISL history. He is yet to find a mark this season, but once he finds the form, he will be unstoppable.

Erik Paartalu (BFC): He is a tall Aussie who has been a fundamental player for Bengaluru FC over the years. Just like Juanan, he defends well and scores from set pieces.

Mauricio (OFC): Scored a brace coming off the bench against Jamshedpur FC, but haven't scored after that. But he takes a lot of shots and some will be on target. There is a possibility for him to break open the Bengaluru's defense with his intriguing runs.

Sunil Chhetri (BFC): The captain, leader, legend of Bengaluru F.C side.  Missed a penalty, but scored one amazing header later on to compensate for his error against Kerala Blasters. He is always a threat to any opposition.

Note: The Fisto's Fantasy 11 is based on predictions and analysis from the previous matches and Fisto Sports won't take any responsibility if the Selected team doesn't perform well. The Team Selection can vary depending upon the Starting 11 of the teams as well.