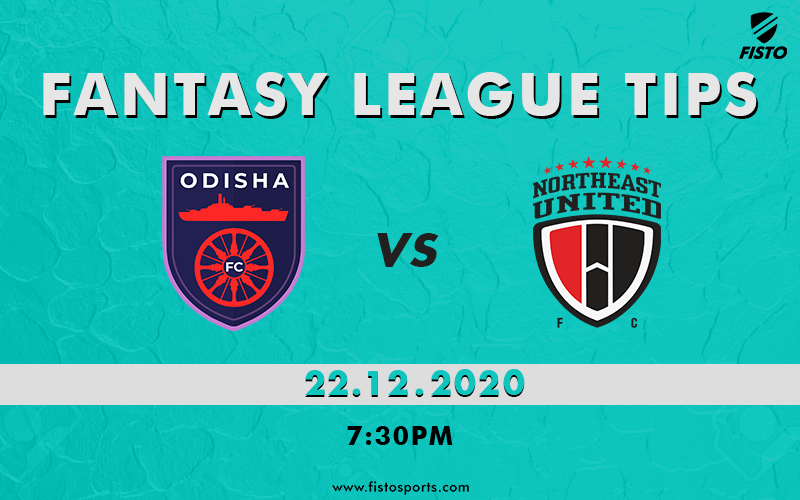 Anyway, it’s a new day – let’s throw a penny in the fantasy football wishing well and hope we don’t stumble in and end up trapped at the bottom for all eternity.

It is match 35 of Indian super league in which Odisha FC takes on NorthEast United F.C.

Odisha FC, stranded in the bottom of the table, hasn't got much of fortunes on their side to be honest, whereas NorthEast United F.C lost their first game of the season against Jamshedpur FC in their last outing.

Let's discuss about the Fisto's Fantasy 11 Team Combinations and tips for today's match.

Arshdeep Singh (OFC) : He is in a great form and it's better to take him in our Fantasy side. Amazed us with an astonishing 8 saves against FC Goa and also made 2 stunning saves against Bengaluru FC.

Benjamin Lambot (NEUFC): The captain of North East United F.C has not put a foot wrong in this edition of Hero Indian Super League. His defensive clearances and Timely tackles will earn us more points.

Dylann Fox (NEUFC): Another Experienced centre back for North East United F.C who partners Benjamin Lambot in defense. Was partially responsible for Jamshedpur's Goal in their last match, but other than that, he is so tight in defense. An important defender that can earn us Fantasy points.

Ashutosh Mehta (NEUFC): We expect NorthEast United F.C to keep a clean sheet, and thus, we have picked Ashutosh Mehta to make it three defenders from the same team.

Steven Taylor (OFC): The captain of Odisha FC. He is fantastic so far and also scored a goal against Bengaluru FC.

Camara (NEUFC):  He is an amazing defensive midfielder. He never fails to earn us some valuable fantasy points with his defensive abilities.

Apuia (NEUFC): He is a talented youngster. Had an amazing game against Chennaiyin FC and Jamshedpur FC. If you are picking up a team and can't find his name in midfield, don't panic because his actual name is "Lalengmawia" and "Apuia" is just his nickname.

Cole Alexander (OFC): The only midfielder of Odisha FC who is having positive performances game after game. He is a box-to-box midfielder and earns us points both offensively and defensively.

Luis Machado (NEUFC): The brightest attacker among all the NorthEast United players so far in the tournament. Creates a lot of chances and takes a lot of shots and that's why he is in our fantasy side.

Idrisa Sylla (NEUFC): He is a threat to opposition defense because of his pace. He is the penalty taker of NorthEast United as well.

Diego Mauricio (OFC): Apart from the "super sub brace" against Jamshedpur FC, He hasn't got much of a success, just like his fellow team mates, in this year's ISL. But we are predicting him to shine today, so he finds a place in our Fantasy 11.

Note:  The Fisto's Fantasy 11 is based on Predictions and analysis from the previous matches and Fisto Sports won't take any responsibility if the selected team doesn't perform well. The Team Selection can vary depending upon the Starting 11 of the teams as well.