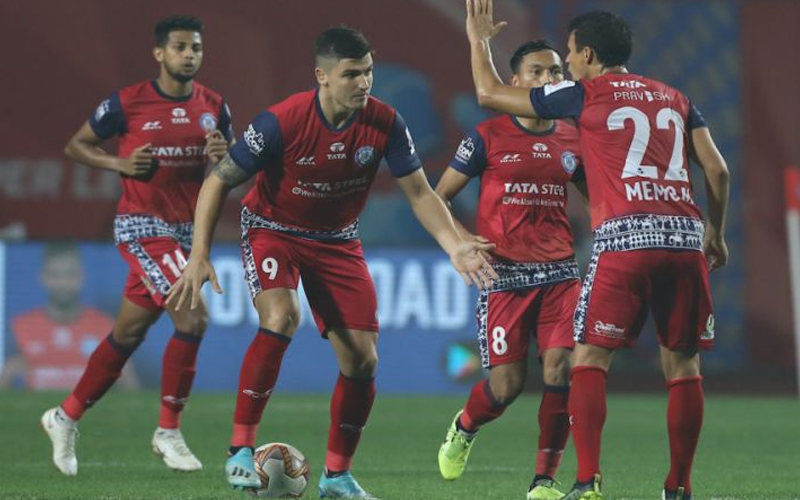 The table-toppers Mumbai City FC  can only fantasise about what could have been after they were held to a 1-1  draw against 10-man Jamshedpur.

A flurry of missed chances saw table-toppers Mumbai City FC settle for only a 1-1 draw against Jamshedpur FC in the Hero Indian Super League at the GMC Stadium, here on Monday.

Owen Coyle's men took the lead through Nerijus Valskis (9') before Mumbai hit back through Bartholomew Ogbeche (15'). A red card for Aitor Monroy around the half-hour mark saw Jamshedpur reduced to ten-men but some dogged defending and a number of missed chances for Mumbai, saw the former get away with a draw.

Mumbai dominated the early exchanges as Monroy had to dive to block Ogbeche's shot as early as the first minute. But it was Jamshedpur who drew first blood. Just nine minutes had passed when Jackichand Singh found Valskis in the penalty box. The Lithuanian's first-time shot was unerring. Barely three minutes later, Monroy could only find the side netting from a free-kick.

Monroy was in the thick of things a couple of minutes later, hacking Cy Goddard down and getting himself in the referee's book. Then, Mumbai found their equaliser. Adam Le Fondre made a run down the right before squaring the ball to Bipin Singh. The latter found Ogbeche and the Nigerian unleashed a powerful drive past Jamshedpur keeper TP Rehenesh.

Jamshedpur responded to the goal with a flurry of attacks but in the 28th minute, the match turned firmly in Mumbai's favour. Monroy brought Ogbeche down right in front of the referee and got his second yellow.

Mumbai unleashed wave after wave of attacks, but to no avail. Mourtada Fall blazed one over in the 38th minute while, a couple of minutes later, Ogbeche headed wide from close range. The Jamshedpur defence held firm as both teams went into the break on level terms.

The second half picked up where the first had left off with Sergio Lobera's men giving everything in their bid to find a winner. They missed a golden opportunity in the 61st minute when a blocked Ogbeche shot trickled down to Rowllin Borges. The midfielder had the goal gaping in front but somehow managed to hoof it over the bar.

Jamshedpur were doing a lot more than just defending. Valskis thought he had given them an unlikely lead in the 79th minute, only for the referee to raise his flag. At the other end, Rehenesh produced a terrific double-save in the 83rd minute to keep his side in the game, first blocking a stinging volley from Le Fondre and then pushing away the rebound to prevent the onrushing Ogbeche from bundling it in.

Ogbeche then missed a clear-cut chance to put his team ahead in injury time, failing to divert a free header from close range into goal.