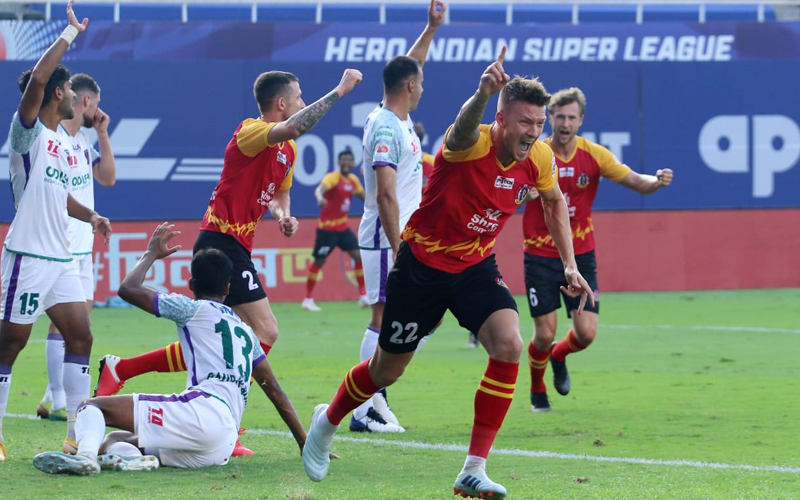 SC East Bengal kick-started the new year on a bright note as they saw off Odisha FC 3-1 to bag their first win in the Hero Indian Super League at the GMC Stadium, Bambolim on Sunday.

First-half goals from Anthony Pilkington (12') and Jacques Maghoma (39') put SCEB ahead before substitute Bright Enobakhare (88'), making his Hero ISL debut, joined the party late on. Diego Mauricio (90') scored the 100th goal of the Hero ISL season but it proved to be a consolation as Odisha saw their winless run continue.

Raju Gaikwad was among the two changes made by SCEB while Odisha named an unchanged eleven from their 2-2 draw against NorthEast United.

Riding a mini storm to take a two-goal lead

Both sides created chances in the first half but it was SCEB who converted them and deservedly headed into the break with a two-goal cushion.

The opening goal arrived early in the 12th minute, through a set-piece. Gaikwad took a throw-in and directed it to the far post. It bounced once and fell to Pilkington, who rose above Gaurav Bora, before burying his header into the net.

Pilkington was denied another goal after hitting the woodwork but a lightning strike from Maghoma helped East Bengal double their advantage in the dying minutes of the first half. Matti Steinmann fed the ball to Maghoma on the left. Prancing into the box, he made space before launching a powerful shot from a narrow angle, leaving Odisha keeper Arshdeep Singh with no chance.

Odisha began the second half strong, hoping to cut short their deficit. They came close to scoring but luck evaded them. Jerry Mawihmingthanga swung a cross into the box for Onwu, who did well to get to the ball but the striker's shot struck the far post.

There was drama late on in the contest with two goals in the final few minutes. Enobakhare put the game to bed with his second attempt after being denied the first time by Arshdeep. Two minutes later, Odisha found the net, but in the end, it proved to be too little too late.