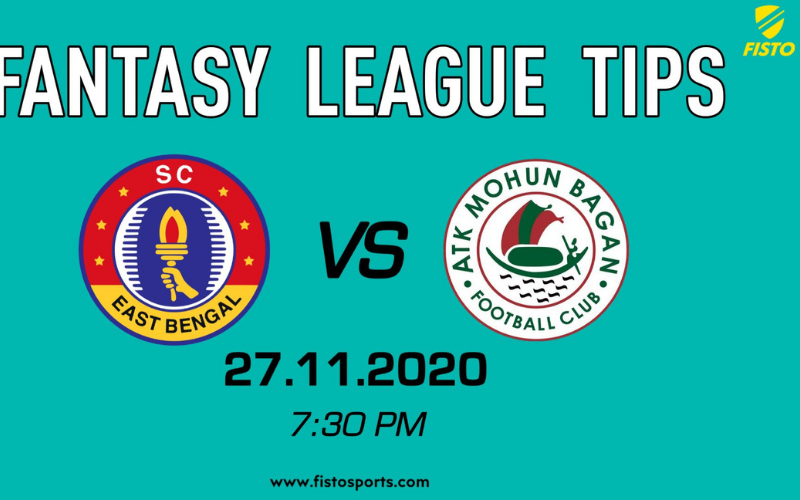 We're only one week into the new Hero Indian Super League 2020-21 season, but we've already got players who think this is their year and players who are already ready to give up.

Take a deep breath and get ready to enjoy our Fantasy XI Hero ISL preview for the highly-anticipated clash between ATKMB and East Bengal.

The much awaited Kolkata Derby is finally going to take place tonight at the Tilak Maidan stadium in Vasco,Goa.

ATKMB is coming fresh from a 1-0 victory against Kerala Blasters in the season opener, whereas, East Bengal is going to kick off their Hero ISL campaign with their match against ATKMB tonight. East Bengal S.C is relatively a new side whereas ATKMB is very much established, since they have retained their core from their last season.

Let’s look at the "Fisto's Fantasy 11 Predictions" for this Kolkata Derby.

Let's take a look at our Fisto's Fantasy 11

Goalkeeper: ATKMB has one of the lethal Attacking Powers in the league with the players like Roy Krishna, Edu Garcia and Javi Hernandez. We can expect them to have many shots on target, and considering that East Bengal is playing their first game, we are going to have The Keeper of East Bengal SC (Who ever starts) as our goalie. Debjit Majumder (EB)

Defenders: In this high intensity clash, it’s very hard to expect a 0-0 scoreline out of this match. And that's evident from the fact that only 2 out of 20 meetings between these two sides has resulted in a 0-0 Draw.

Let's look at our defense for the match.

Tiri (ATKMB) : The best Defender in the pitch against Kerala Blasters.. Having played in India for more than 3 Years, He is expected to put in another impressive performance.

Jhinghan (ATKMB) : This Indian Defender is a must have for any team. Apart from his "long leg" tackles, he can also score headers from set-pieces.

Prabir Das (ATKMB) : He is a very good pick for our fantasy team. Prabir das often delivers an inch perfect cross towards the box, which is often dealt with either one of the ATKMB players. So, expect many key passes or an assist to his name today.

Danny Fox (EB) : He is relatively unknown to the Indian Fans, But this Centre back has more than 7 Years of English Championship (2nd tier football) experience, and is also a great leader at the back.

If both the manager's field their usual and trusted formation, then it's fair to say that the midfield is going to be the key for both the teams today. And Both these teams have a good amount of talented midfielders as well.

Javi Hernandez (ATKMB) : One of the best Players for ATKMB. He is a good creator and also chips in with a few shots on goal.

Carl McHugh (ATKMB): Had an amazing game against the Blasters. Very good defensively, he is also the set piece target for ATKMB. So, don't be surprised if he nets a goal through set pieces.

Anthony Pilkington (EB) : This Irish  is a versatile Player who can play as a second striker / attacking midfielder, as a winger, and also as a Centre Midfielder. If he starts today for East Bengal, then the attacking play will be mostly involving him.

Jacques Maghoma (EB) : Another player who can play down the wings and also play as a creator. Just like his team mate Danny Fox, Maghoma also has seven years of championship experience.

We all know the Firepower of ATKMB in this area of the game. And with East Bengal having players like Jeje, CK Vineeth and Aaron Holloway, who has not impressed /played much with their last franchise, we are going with both the strikers of ATKMB as our Fantasy 11 attackers.

Roy Krishna (ATKMB) : No doubt that he is one of the prolific goal scorers of the league. Having also scored against Kerala Blasters, he will be raring to get more today.

Edu Garcia (ATKMB) : Just like Javi Hernandez, Garcia is also a creator who takes a shot on target every time he gets a chance. He also delivers the set-pieces for ATKMB, so he is a valuable asset for our side.

Who will reign supremacy in the Kolkata Derby today?