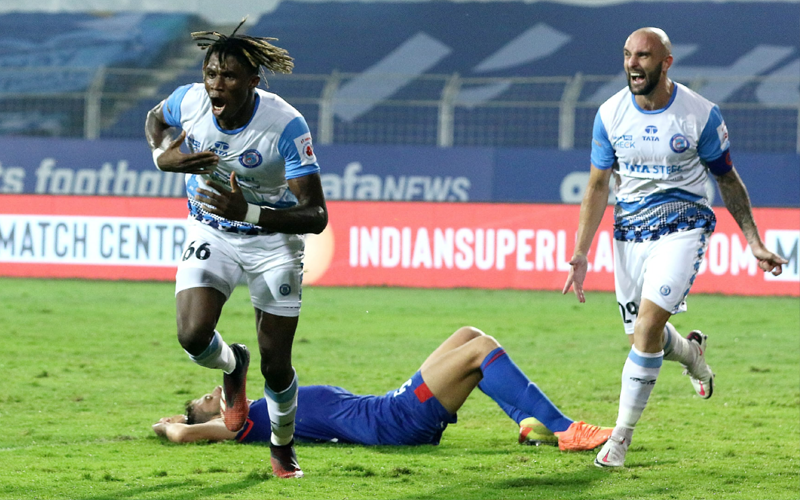 A game full of chances finally got a goal in the 79th minute, as Stephen Eze's headed effort was enough to secure three points for Jamshedpur FC against an impressive Bengaluru FC side.

Sunil Chhetri's side fell to a Stephen Eze (79') goal as the Men of Steel leapfrogged Bengaluru FC to third spot with 13 points from nine matches. BFC stay fourth with 12 points from eight games.

Bengaluru took just three minutes to register their first shot on target. Kristian Opseth’s free-kick nearly curled into the bottom corner, only to be kept out by a diving TP Rehenesh.

BFC continued to be on ascendancy but kept missing chances. Sunil Chhetri was set through on goal by a brilliant Suresh pass, but the skipper’s shot from a good position was deflected behind. Off the resultant corner, Dimas found Chhetri, but his effort sailed over the bar.

JFC had their first real chance in the 17th minute when Aniket Jadhav drilled in a low cross for an unmarked Nerijus Valskis, only for the Lithuanian to blaze it over the bar. Jamshedpur had another chance when Alexandre Lima kept an Aitor Monroy corner alive and squared the ball to Eze. However, Eze’s shot on goal was cleared by Dimas Delgado.

Rehenesh’s brilliance at the half-hour mark kept the scoreline goalless. It was two against one for BFC when Suresh was set on goal by Chhetri. With just the keeper to beat, Suresh laid it for Cleiton Silva, but his weak pass was well intercepted by Rehenesh.

Both teams kept knocking on the door with Chhetri missing another attempt for BFC while Gurpreet Singh denied Jackichand Singh with a brilliant save. But they went in goalless at the break.

Jamshedpur were denied at the hour mark by two vital blocks. First Peter Hartley saw his weak shot saved by Gurpreet. The rebound fell into Eze’s path and his goal-bound shot was blocked by Bheke.

Harmanjot Khabra, who marked his 100th appearance for Bengaluru, had a quiet day.

JFC finally broke the deadlock through Eze, who scored his third goal of the season. Lima played a weighted pass to Aniket on the right and the latter floated a cross in the box. Eze got past his marker and dived low to score past Gurpreet.

With just five minutes left on the clock, Rehenesh denied Bheke with a point-blank save.