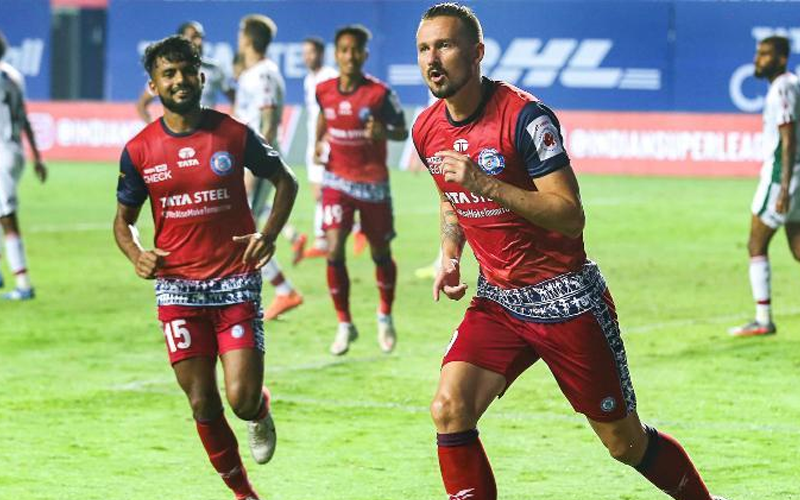 A double from Nerijus Valskis was enough as Jamshedpur FC bagged their first win in the Hero Indian Super League Season 7 as they beat early pace-setters ATK Mohun Bagan 2-1 at the Tilak Maidan Stadium, on Monday.

Valskis (30’, 66’) scored in either half for Owen Coyle's side, while Krishna pulled a late goal back for ATKMB.

The result also meant ATKMB’s perfect run in the campaign came to an end following the defeat.

Jamshedpur made two changes to their side which was held to a 1-1 draw against Hyderabad FC. Owen Coyle handed a first start to William Lalnunfela while goalkeeper TP Rehenesh was back in the side after serving a suspension.

Eduardo Garcia, Brandon Inman, Glan Martins all started for ATK Mohun Bagan as coach Antonio Habas made three changes to his side which defeated Odisha FC. Yet, despite fresh legs, the Mariners got off to a lackluster start.

It wasn't smooth sailing for Jamshedpur either as ATKMB threatened them during counter-attacks. But JFC's resilience and power shone through and that helped them deservingly take the lead at the half-hour mark through Nerijus Valskis.

JFC's first real chance came early in the first quarter but Mohammad Mobashir saw his shot hardly worry Arindam Bhattacharja. Both teams were attacking at will but it was the home side who had their best period at the half-hour mark gaining a series of corners.

Coyle's men nearly took the lead in the 29th minute when Peter Hartley connected well to Aitor Monroy's corner, but the Englishman's header was cleared off the line by Pritam Kotal, which eventually was pushed for another corner.

The resultant corner led to a goal. This time it was Valskis who peeled his marker with a powerful header to guide in Monroy's flagkick, which proved too strong for Bhattacharja.

ATKMB were fortunate not to find themselves more than 1-0 behind at the interval as Bhattacharja was forced to pull off a diving save to deny Valskis for his second.

Coyle’s side were prepared not to have any slip-ups. Though ATKMB came stronger in the second half, JFC kept things tight in defense, with goalkeeper TP Rehenesh keeping them in the game.

ATKMB had a couple of opportunities to grab an equaliser but Rehenesh was at his best to deny Krishna from close range by throwing his body on the line and later dived full-stretched to save Glan Martins' long-range shot.

JFC doubled the lead in the 66th minute and it was Valskis who got on the scoresheet again. The goal came once again from a set-piece as Monroy dipped in a perfect corner-kick which was flicked by Rahman. Valskis pounced on the ball and smashed it into the roof of the net to make it 2-0.

With 10 minutes left on the clock, Roy Krishna pulled a goal back for the visitors. Substitute Manvir Singh flicked the ball to Krishna, who was lurking in the box, and the Fijian rounded the keeper to score his fourth goal in as many games. There were claims for offside by JFC, though replays suggested it to be. The linesman kept his flag down, so the goal remained.

While ATK desperately tried to find the equaliser, JFC defended resolutely to earn their first win of the season.