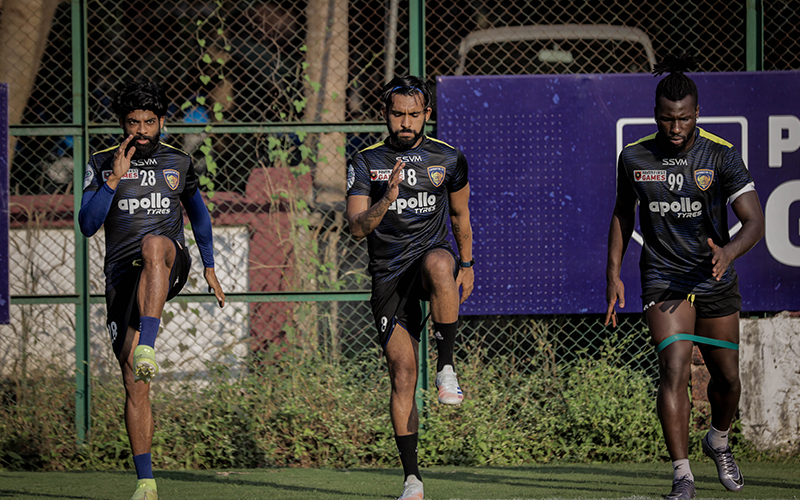 Mumbai City's efforts to maintain a top of the table position will meet a tough test in the form of Chennaiyin FC.

On a high after securing three wins in a row, Mumbai City FC will aim to consolidate their place on top of the Hero Indian Super League Season 7 table when they face Chennaiyin FC at the GMC Stadium in Bambolim, on Wednesday.

Pre-match media duties up ahead for Sergio Lobera later today ahead of tomorrow's big one 🆚 @ChennaiyinFC! 🎙️

After suffering a defeat to NorthEast United in their opener, Sergio Lobera's side bounced back in style by winning three games on the trot. ATK Mohun Bagan's defeat to Jamshedpur FC on Tuesday meant that Mumbai City maintained their place on top of the Hero ISL table, thanks to a better goal difference.

Mumbai City's strong squad depth is finally paying dividends, with Lobera choosing to rotate his players. Ahmed Jahouh, Hugo Boumous, Rowllin Borges and Adam le Fondre are among the ones who have shone so far while the defence, led by keeper Amrinder Singh, has also remained solid. Mumbai City have conceded just one goal so far and have kept three clean sheets.

The fact that the Islanders head into the game as table-toppers will give Lobera confidence, but the Spaniard doesn't want to pay much attention to their position.

"Our focus needs to remain on the games," said Lobera. "It's a big mistake for us to watch the table now. We want to win, we are top of the table and happy about this situation. But the most important thing is to put our focus on how it's possible to win the next game, not about the target of where we want to be. We need to play game by game and see the table at the end of the season and achieve the best position."

Can Chennaiyin find their scoring boots?

Meanwhile, Chennaiyin FC find themselves in a tricky situation. The two-time winners began their campaign with a 2-1 win over Jamshedpur but are winless in their last two games, where they also failed to score.

Csaba Laszlo's side has looked lively in the attacking third and have fashioned chances but their poor conversion has cost them. They will hope to get their scoring boots on against a Mumbai side that is yet to concede from open play this season. With the injured Anirudh Thapa set to miss out, the onus will be on Rafael Crivellaro to provide creativity for Chennaiyin.

"We will try (to unlock their defence)," said Laszlo. "We are capable of scoring. We know their strengths and they've shown they are a strong team but we are also not weak, and we showed we can play our football and (also) capable of scoring goals."