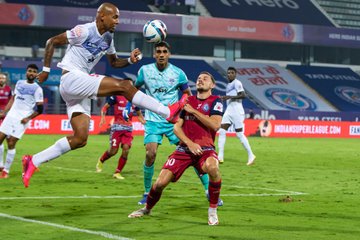 ISL 2021-22: Bengaluru and Jamshedpur settle for a point apiece in an entertaining 0-0 draw

Both teams had their chances but it ended goalless at Bambolim.

Jamshedpur FC and Bengaluru FC were involved in a game that had everything except a goal. The two sides played out an engaging goalless stalemate in the 2021-22 Hero Indian Super League (ISL) at the Athletic Stadium in Bambolim on Monday.Jamshedpur moved to the second spot on the table with 12 points but would rue their missed opportunity to close the gap on leaders Mumbai City. Bengaluru now have two draws in a row and their first clean sheet but languish at second-last with just 6 points.Sunil Chhetri was named on the bench for the second game in a row. Jamshedpur were dealt a major blow even before the first whistle was blown. Lithuanian striker Nerijus Valskis pulled up with an injury during the pre-match warm up with Jordan Murray replacing him up top.Udanta Singh had Jamshedpur in trouble early on. First, the India international failed to tap in from Ajith Kamaraj's cross and then minutes later, he ran past the defence to square the ball into the box, only to be let down by his strikers, who failed to reach on time.Brazilian midfielder Alex Lima had other plans at the opposite end. The Bengaluru defence failed to close down Lima as he swiveled past three men to take aim at goal. However, his attempt went wide.Both goalkeepers were called into action multiple times in the first half. Hat-trick hero from last week, Greg Stewart crossed in a ball towards Murray but Gurpreet Singh Sandhu put in a critical clearance. Rehenesh TP's effort was more spectacular. Ashique Kuruniyan spewed in a ball from the left perfectly for Cleiton Silva, whose header was parried off brilliantly.The change of ends brought more drama for the neutral as both team were handicapped by their own profligacy. Greg Stewart and Lima continued to be the focal points of attack for the Men of Steel but it was effective defending that kept BFC out of trouble.Prince Ibarra had just a couple of shots, that too off target but Cleiton, who looked promising was substituted off for Sunil Chhetri with quarter of an hour to go with Marco Pezzauioli looking for inspiration from the India captain.Chhetri almost pulled off a blinding winner in the 83rd minute. Ashique whipped in a long freekick that was headed goalwards by Chhetri. A slight deflection off Alan Costa and the ball bounced off the crossbar, summing up the evening of some evenly contested football.