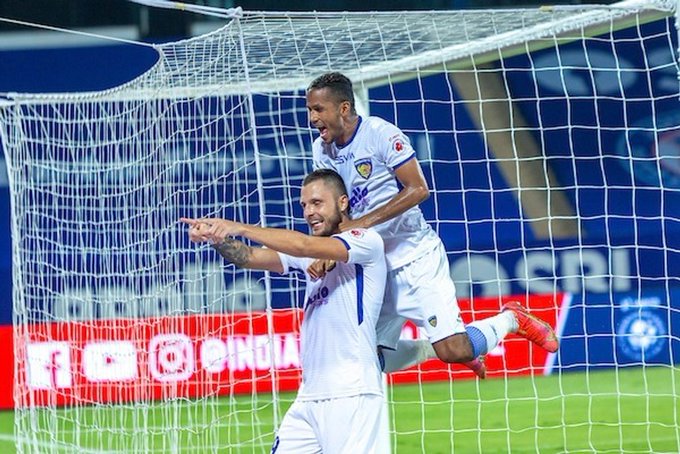 Fisto Staff
Share
Chennaiyin FC got back to winning ways after a narrow 1-0 win over Jamshedpur FC in the 2021-22 Hero Indian Super League at the Athletic Stadium in Bambolim. The Men of Steel were squeezed out of the first four positions after Kerala Blasters FC earned a point against FC Goa earlier in the evening. Post this result, they slip to sixth place as Bozidar Bandovic's men hand them their second loss of the campaign.Lukasz Gikiewicz (31') opened the scoring with his first shot on target and eventually, it was enough to separate the teams.Narender Gahlot was shown the yellow card at the 20th-minute mark following a nervy start by both teams. Mirlan Murzaev sent his attempt above the goal from the subsequent long-range free-kick. A few minutes later, Lukasz Gikiewicz broke the deadlock with CFC's first shot on target at the half-hour mark. The striker comfortably headed a cross from Vladimir Koman past the goalkeeper from inside the box. He was left unmarked by the JFC defenders and the striker from Poland made no mistake with his header.Greg Stewart had a brilliant opportunity just before the halftime whistle to score the equaliser but he uncharacteristically aired his shot from the edge of the penalty area. The Marina Machans held on to their lead before heading into the break at halftime. Ritwik Das, the substitute, also took an attempt six minutes post the restart but he sliced his shot which went wayward in the end. Ricky Lallawmawma then became the second JFC player to receive a yellow card for a poorly timed challenge. Shortly after, Germanpreet Singh had a superb chance to increase the lead at the hour mark. However, his shot from the edge of the box post a counter-attack was blocked by a JFC defender. In the 72nd minute, Debjit Majumder got down quickly to keep Stewart's attempt at bay after the forward weaved past multiple defenders to release a left-footed shot. Ishan Pandita was one of the substitutes sent in by Owen Coyle and the striker miscued a sensational opportunity to score the equaliser. A well-placed low cross from Murray found Pandita 12-yards away from the target but his first-time right-footed shot did not connect with the ball which rolled wide off the mark to the shock of all JFC players. Chennaiyin FC kept their lead intact in a professional display and repelled everything thrown at them by the Jamshedpur FC forwards.Jamshedpur FC faces struggling NorthEast United FC in their next outing at the Athletic Stadium on Thursday while Chennaiyin FC will meet FC Goa at the same venue on Saturday.