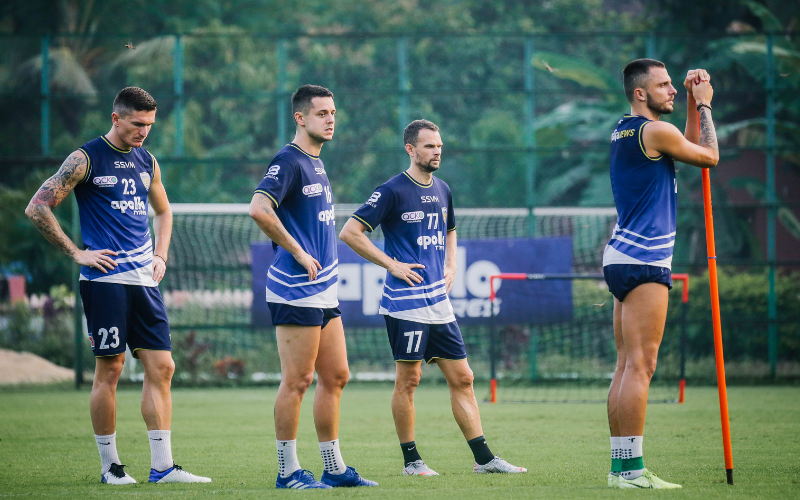 Chennaiyin FC will have to be at their best to halt the Mumbai City FC juggernaut and remain unbeaten when the two sides clash in a marquee 2021-22 Hero Indian Super League (ISL) clash at the PJN Stadium in Fatorda on Wednesday.Reigning champions Mumbai have won four out of their five games so far, sitting pretty at the top of the heap with 12 points from five games.Chennaiyin are placed fourth with eight in their kitty from four engagements.The Islanders recorded a 4-2 victory in their last match against Jamshedpur FC, going 3-0 ahead in the first 25 minutes, underling their firepower in attack.Igor Angulo has been in sublime form, egged on by the likes of Cassio Gabriel, Ahmed Jahouh and Mourtada Fall who have all shown quality and consistency to form the backbone of Des Buckingham's side.

Mumbai have played 16 matches at Fatorda in Hero ISL so far, winning nine and scoring 29 goals in those 16 matches.The game on the morrow will also be a matchup between the most potent attack in the league and the tightest defence in the league.Mumbai (16) have scored more goals than any other team while Chennaiyin FC haveconceded only 2 goals, the best record in the league."We will take every game, one at a time. We did not get carried away after our first game, and we did not get carried away after our second when we had one win and one loss," said Buckingham on the eve of the tie."Our focus is very much on the next one. They are the only team in the league who are unbeaten, so it's a challenge," he added.Chennaiyin, besides being resolute in defence, have missed spark upfront with their forwards Lukasz Gikiwicz being profligate in front of goal, especially against SC East Bengal where he missed a hatful of chances.But at the back, they have conceded just one goal via open play, the best record in the league."We need to go game by game. We need to be better and it's not enough (unbeaten run)," Chennaiyin FC head coach Bozidar Bandovic said."We need to be stable if you want to get success. We need to keep going like this but of course we need to win games," he added.