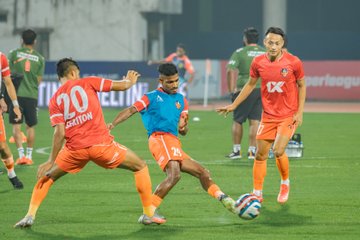 All eyes will be on FC Goa when they take on Odisha FC in the 2021-22 Hero Indian Super League at the Tilak Maidan Stadium on Friday.FC Goa parted ways with Juan Ferrando and turned back to Derrick Pereira in a frantic last few days which saw Ferrando join ATK Mohun Bagan after Antonio Lopez Habas vacated his chair at the helm.Pereira, who was with the club as their technical director, had also taken charge of the Gaurs along with Clifford Miranda and Roma Cunillera during the fag end of the 2019-20 season after the departure of Sergio Lobera.During his short stint, he took the side to the top of ISL table at the end of the 2018-19 league phase, paving the way for FC Goa's qualification for group stages of the 2021 AFC Champions League.

A veteran tactician in Indian football, Pereira is not expected to be on the touchline on Friday with former India international Miranda to be in charge in an interim capacity."It was a shocking call for me to take charge of the FC Goa team, whose aim is to always be on top. I have been in touch with the players virtually and can't wait to be with them. I have see the amount of hard work the boys have put in. It's just the results haven't come our way. We need to continue what we have been doing and I am sure we will start getting results," Pereira said, undergoing mandatory quarantine before he links up with the squad in the bio-bubble.Goa are eighth in the points table having seven points from six games. They have not lost in their last three outings, winning two of them in a bid to turn a corner after three successive losses to start the season. Goa were held to a 1-1 draw by Hyderabad FC in their last engagement but the team showed fight and marked improvements from their first three games.Odisha, meanwhile, need to reverse their recent run of form. The Kiko Ramirez-coached side have been winless in the last two games and have dropped to seventh in the table from six matches.In their 6 games this season in Hero ISL, Odisha FC have scored 12 goals, an average of 2 goals a game but have lacked that consistency in the final third. Javi Hernandez has been in tremendous form, netting four goals in the Hero ISL. He is fourth in the race for the Hero ISL Golden Boot, and he has 2 assists this season additionally. His tally of 6 goal contributions is only behind Greg Stewart (8) and Roy Krishna (7) for most goal contributions this season.All the Spaniard's four goals have come from outside the box. His tally of 4 goals from outside the box this season is the joint highest for goals scored from outside the box by a player in a single season along with Diego Mauricio, who scored 4 from outside the box last year.Kiko Ramirez is however concerned about the defence consistently leaking goals. "Maybe it is good for the neutrals but we as a coaching unit our main priority is not letting in goals in any game. We need to work hard and implement our strategies in the game."