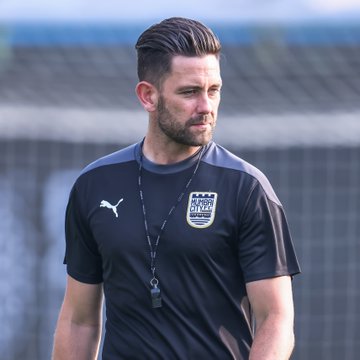 Fisto Staff
Share
The top two teams go head to head when defending champions Mumbai City FC face off against red-hot Jamshedpur FC in the 2021-22 Hero Indian Super League (ISL) at the PJN Stadium in Fatorda on Thursday.
'Home' team Mumbai have had a good start to the season under new coach Des Buckingham, currently sitting pretty at the top of the heap. After a shock defeat to Hyderabad FC, Mumbai City registered back-to-back wins which included a 5-1 hammering of arch-rivals ATK Mohun Bagan.But Owen Coyle's Jamshedpur are snapping at their heels, placed second having eight points from four games.The Islanders have been at their aggressive best, something they adopted from previous coach Sergio Lobera's coaching manual. Igor Angulo has been in red-hot form for Mumbai, scoring four goals so far. Buckingham's men have netted the most number of goals this season and barring the game against Hyderabad FC, they have looked like an intimidating unit.
Fighting for first
Buckingham, though, is not getting carried away."It's a good start and that's all. It doesn't matter where you are in the league right now, it's about where you finish," said the former Melbourne City assistant coach.Mumbai have conceded two goals in the last two outings despite winning by 3-1 and 5-1 margins.Buckingham said as a unit, he would love to see the side keep a clean sheet but at the same time, he would not change the way they play."We would love to win every game with a clean sheet. But we want to play an expansive game of football and in an exciting way. I would not want to change that."Jamshedpur, on the other hand, have looked their part this season, staying unbeaten in four games. Coyle's charges were unstoppable against ATK Mohun Bagan in their previous encounter, not letting last year's finalists settle down into any kind of rhythm."We have a group of players who work their socks off and have quality. The boys are always hungry to do well for the club, for themselves and our fans which is very important," said Jamshedpur FC head coach Owen Coyle.

Asked about his Indian players doing well, Coyle said: "They are working very hard and the foreign players are helping them. It's nice to see young players doing well."Jitendra Singh was excellent against ATK Mohun Bagan, pulling the strings expertly in the middle of the park.Coyle added that Mumbai City FC are a very good side and they would have to be on their toes to get a positive result.
Jamshedpur FC can take heart from the fact that they and NorthEast United were the only two teams to stay unbeaten against Mumbai in Hero ISL 20-21.The first game between the sides ended in a 1-1 draw while Jamshedpur ran out 2-0 winners in the second game.

Will Mumbai City inflict further woe on the Reds? Or will JFC make it four out of four in the league?