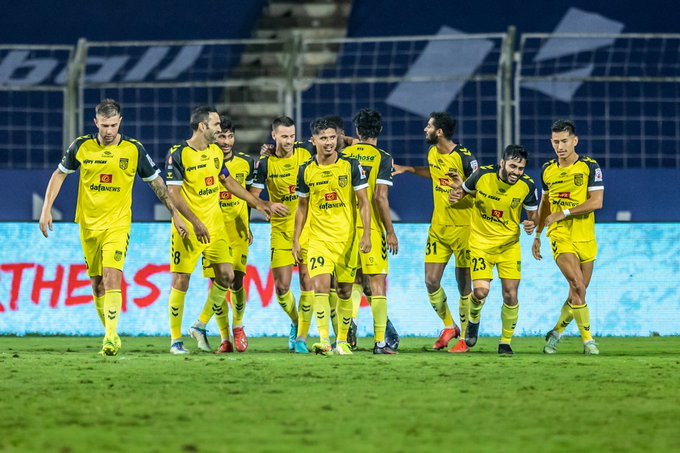 Bartholomew Ogbeche added fuel to debate on whether he is the league's finest striker with a poacher's brace on either side of halftime to take him top of the charts in the Hero Indian Super League's all-time scorers' list and also ensure Hyderabad FC remain top of the tree with a 5-0 win over NorthEast United here on Monday.Ogbeche scored in the 3rd and 60th minute to take his tally to 14 goals this season and overall number to 49, one more than Sunil Chhetri and Ferran Corominas who have scored 48 goals in history of the league. Obgeche achieved the feat in just three and half years in India's premier club competition.Besides Ogbeche, Akash Mishra (45th), Nikhil Poojary (84th) and Edu Garcia (88th) also found the back of the net as Manolo Marquez's men ran riot at the PJN Stadium in Fatorda to stretch the lead at the top to four points and also do the double on the Highlanders. They have 26 points from 14 games. NorthEast United's tumultuous season continued unabated as they remained on 10 points from 15 matches.It took Hyderabad three minutes to nose ahead and Ogbeche -- who else -- was at the right place at the right time, slamming home a rebound after Joao Victor's header pinged off the post and fell kindly for the red-hot Nigerian who took his tally to 13 goals this season and joined Ferran Corominas and Sunil Chhetri in the all-time leading scorers' list in the Hero ISL with 48 strikes.It was all Hyderabad after the first goal as they dictated the game and kept pressing the NorthEast United backline. In first-half added time, the yellow shirts made it 2-0 with Akash Mishra scoring his second goal in as many games, heading in a Joel Chianese corner from the left side home with aplomb.For NorthEast United, a brief spell of possession with Marco Sahanek their most impressive player did not bear much fruit as they went into the break trailing 0-2.Ogbeche doubled his tally at the hour mark, further underlining his credentials as the league's best marksman. The excellent Chianese whipped in a cross but Subhashish Roy Choudhury dealt with the danger only to see the ball sent back in towards the far post. Chianese headed the ball into the path of Ogbeche who nodded low with the ball scraping past the keeper and into the net.Chianese deserved a goal for all his industry and almost had one after he got free from his marker but drilled his effort inches wide of the target.There was drama in store Suhair Vadakkepeedika's goal was disallowed after the striker thought he had pulled one back for the Highlanders. Poojary piled on the misery for NorthEast United, getting on the scoresheet after substitute Sahil Tavora put the ball on a plate for Poojary who ran in to hammer the ball hard and low, across the keeper.It was 5-0 soon after, Edu Garcia joining the party with a late strike as Hyderabad not only consolidated their lead at the top but also improved the goal difference.