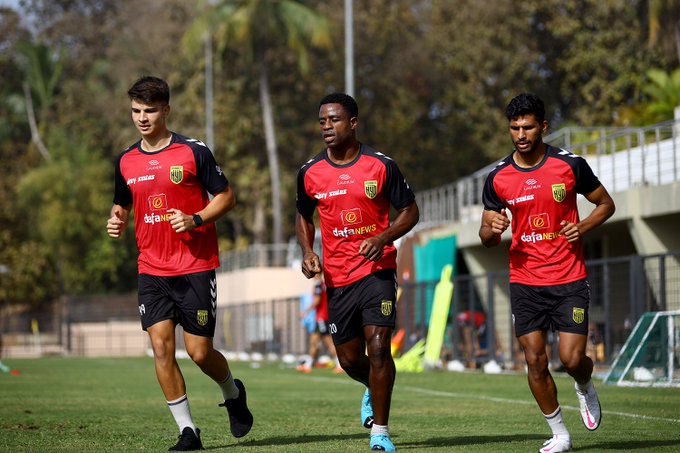 Press Release
Share
Hyderabad FC will look to extend the newfound form and consolidate their lead at the top of the points table when they take on struggling NorthEast United FC in the Hero Indian Super League at the PJN Stadium in Fatorda on Monday.
Hyderabad got back their mojo after a string of underwhelming performances in the middle, to remain unbeaten in their last three encounters. They pummelled SC East Bengal to then show character and come from behind to beat Odisha FC to now sit top of the tree with 23 points from 13 games, one more than second-placed Jamshedpur FC who have played a game less. NorthEast United are 10th in the points table having 10 points from 14 games, and Khalid Jamil's side would be desperate to snap a seven-game winless run. But in Hyderabad, they would be put to the sword as the league leaders boast of not only good attackers with Bartholomew Ogbeche at the heart of it, but full-backs like Asish Rai and Akash Mishra who play a key role in the team's balance.Besides their defensive duties, the pair possess a potent attacking threat as displayed by Mishra the other day with not only his goal but three assists so far this season. Asish Rai has provided five assists and together the duo are one of the main reasons for the team's success.Hyderabad have also shown they have it to win games after falling behind, a trait champions display. They have gained 10 points from losing positions in a match, the most by any team so far."We do have the League's top scorer in Ogbeche but the day he did not score, it is good for our confidence that other players were able to score. The mood is good after the back-to-back wins," said Marquez on the eve of the game.On NorthEast United and the top-four race, he added: "NorthEast deserved to win their last two games, against Chennaiyin and Mumbai City. The NorthEast of now is more similar to the one we saw last season with better foreigners and good Indian players. For sure, it will be a difficult game for us."The fight for the top four maybe will go till the last two rounds. The first eight teams now have chances to qualify. So it is very unpredictable,"NorthEast United have struggled miserably at the back, Jamil not able to settle to a steady defensive lineup.The Highlanders have conceded the most goals in the Hero ISL this season (28). If they concede 3 more goals, this could be the worst defensive performance for NorthEast United in the league stages of a Hero ISL season in terms of goals conceded.They have started with 9 different back-four combinations in their 14 matches this season and the longest Khalid Jamil has started with the same back 4 is 3 consecutive games. The last time the two sides met, Hyderabad thrashed NorthEast United 5-1.