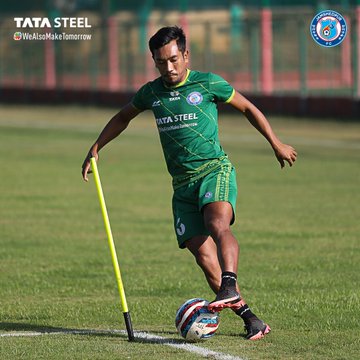 Bolstered by the arrival of Daniel Chima Chukwu in their already lethal attacking arsenal, Jamshedpur FC will look to continue snapping at Kerala Blasters' heels at the top of the table, when they take on Hyderabad FC in the 2021-22 Hero Indian Super League at the Athletic Stadium in Bambolim on Monday.Jamshedpur, placed second in the points table with 19 in their kitty from 11 games, added striker Chima to their ranks on Saturday. The Nigerian moved to Jamshedpur from SC East Bengal where he scored two goals.The Men of Steel are one point adrift of league leaders Kerala who play on Sunday but a win on the morrow would keep them very much in the fray for a top-spot and if Kerala drop points, the Men of Steel could regain pole position.Jamshedpur had to dig deep to get past wooden spooners SC East Bengal in their last game, Ishan Pandita once again coming off the bench to score the winner. But Owen Coyle won't be too worried as his men have looked like a well-oiled machine and Greg Stewart has been magical. Stewart was brilliant in their last game as well and the Scotsman can find a good foil in box striker Chima in the days to come as the Nigerian has to serve a mandatory quarantine period now."It will take more of the same, the hard work and the performances on the field. We have to continue to replicate those standards. If we do that we can show and we have shown that we can stand toe-to-toe with anyone. There's certainly a lot of hard work ahead of us but we are looking forward to it," Owen Coyle said ahead of the game."It will take us being at our very best. Hyderabad are one of the top teams in the division and they have some wonderful players with a head coach like Manolo who I hold in very high regard," Coyle added, praising Monday's opponents.Jamshedpur have also scored 11 goals via set pieces, the joint highest in the league along with Bengaluru FC (11). Hyderabad, meanwhile, have had their set-piece woes, leaking seven of their 11 goals from dead ball situations.For Hyderabad, coach Manolo Marquez would be hoping his team can get back to winning ways after enduring a winless spell of three games. Hyderabad missed talisman Bartholomew Ogbeche in the last outing due to suspension and with Javier Siverio also scoring goals, it will be a good headache for Marquez ahead of Monday."Ogbeche is the top-scorer in the league. But Siverio was the best player for us in the last game. Maybe I have to put them together tomorrow, we will see. We don't have too many players who score goals so maybe we have to look to play both," the coach said.On Jamshedpur FC, he said, "Jamshedpur is a very physical team. They have the best player in the championship, Greg Stewart. It is a very tough game."