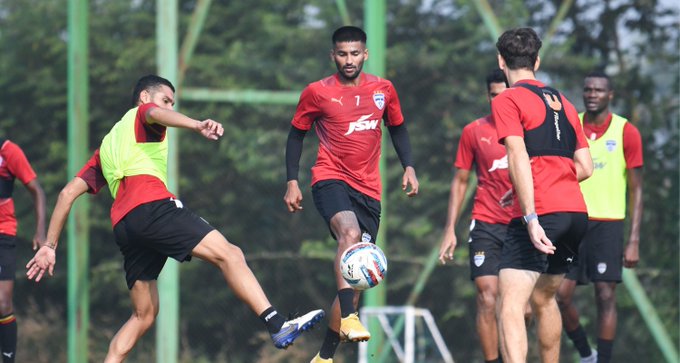 A buoyant Bengaluru FC will look to build on their newfound form when they take on wooden spooners SC East Bengal in the 2021-22 Hero Indian Super League at the Athletic Stadium in Bambolim on Tuesday.The Blues embark on the new year high on confidence after notching up their second win of the campaign after a spell of seven winless encounters. They had the rub of the green but Marco Pezzaiuoli's charges showed a lot of character against Chennaiyin FC in their last outing, betraying their recent run of three games where they have looked the part.Cleiton Silva has been the shining light for the former champions in a season where they have lacked the spark until the last game and before that, managing to keep a clean sheet after a long time. Besides Cleiton, Udanta Singh also seemed to have got back his form not only because of the goal but his overall display. Ashique Kuruniyan has also looked good with the likes of Parag Shrivas, Roshan Naorem and Ajith Kamaraj also impressing in fits and starts."Winning games gives us energy, we scored our last two penalties after we missed our first two, these things make a difference in these games. Leon Augustine and Musavu-King will miss the game due to injury while Sarthak Golui is still not available due to personal reasons," said Pezzauioli."Considering SC East Bengal have a new coach, we don't know much about their style of play. We're not preparing specifically for them, we're going to train hard to win and focus on ourselves," he added.Placed eighth in the points table, Bengaluru will take on SC East Bengal knowing that they have a golden opportunity to climb up the table. SC East Bengal are the only team so far to not register a victory in eight games.The red and golds will be without key player Antonio Perosevic who is serving a suspension and will have Renedy Singh in the dugout as interim coach after Jose Manuel Diaz mutually parted ways with the club. Former India captain Renedy will have a point to prove in his first stint managing a side in the Hero ISL."The job at hand is a difficult one. No one wants to be in the place SC East Bengal is at. For me, I take this as a good challenge, to show that we can do better, and if we keep fighting till the end and I am sure we will do better," said Renedy.SC East Bengal have announced Mario Rivera as their new head coach but the Spaniard, who has coached the team before, won't be available for the game against Bengaluru. The Kolkata side have looked lacklustre at the back to say the least and have also not shown spark in the middle of the park. Daniel Chima Chukwu has flattered to deceive so far and the side also are dealing with injury issues to Franjo Prce and Jackichand Singh.