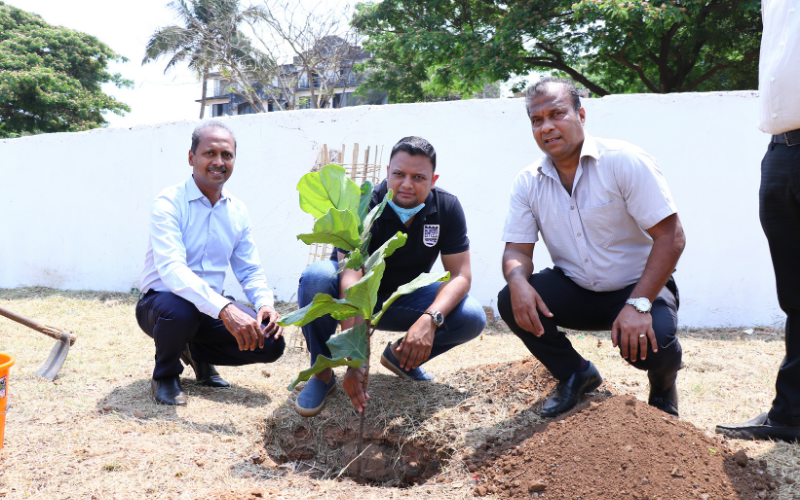 After clinching their maiden Indian Super League title, double winners, Mumbai City FC kick-started their tree plantation drive in Panaji on Tuesday as a part of their 'Thank You Goa' campaign.

In the esteemed presence of Sanjit Rodrigues, Commissioner, Corporation of the City of Panaji and Bruno Coutinho, former Indian International footballer, the Islanders began the initiative at the Bhausaheb Dayanand Bandodkar Ground by planting the first 15 trees.

Earlier in February, Mumbai City FC announced their intention to contribute to the bio-diversity of Goa, committing to plant five trees for every goal scored this season. The move is a token of their gratitude and appreciation towards the state and its people for their hospitality and its role in making the 2020/21 Indian Super League season a massive success despite the COVID-19 outbreak.

With the support of the Corporation of the City of Panaji and their Urban Forestry Programme, having finished a hugely successful campaign with a tally of 39 goals, the Islanders will plant 195 trees in the state of Goa.

The Mumbai City FC family also extended their gratitude to the staff of ITC Grand Goa, where the Islanders housed their bio-secure bubble for nearly six months, with no effort spared in accommodating the Islanders' contingent of players and staff.

"With the number of unprecedented challenges in these difficult times, it has been a year like no other. The state of Goa has shown us love and been an excellent host to us and to the Indian Super League. This season will forever hold a special place in our hearts, being able to win both the Shield and our first ISL Trophy. By planting the first trees today with the support of the Corporation of the City of Panaji, we hope to leave behind a token of our gratitude and we're glad we could cap off this memorable journey by giving back to this wonderful state and its natural reserves."

"Being a local boy, it gives me immense pride that Mumbai City FC could achieve our historic double in my home state and to be here today on behalf of our players. These last six months have been tremendously challenging for every single person involved in pulling off this herculean effort, not just in our Club but foe everyone involved in the ISL and the state of Goa. Through our 'Thank You Goa' campaign, I am happy to be able to give back to my home, to mother nature and truly thank the lovely people of Goa for giving such great memories in this unique season."

Sanjit Rodrigues, Commissioner, Corporation of the City of Panaji, said:

"The thought (by Mumbai City) is wonderful. We look at increasing our green cover, we look at increasing our biodiversity, and I think Panaji has always been in the forefront for taking care of our environment. I think the initiative is wonderful and the city welcomes it. We would like to thank Mumbai City for this initiative. We wish the best for the club and once again, thank Mumbai City for being part of our city."