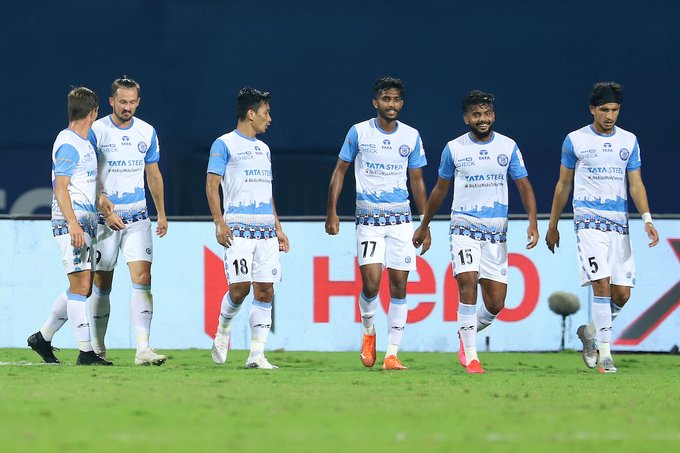 Jamshedpur add to Odisha woes thanks to spectacular strike from Mobashir

Jamshedpur FC finally gave their season a morale-boosting kick with a battling 1-0 victory against a struggling Odisha FC side on Monday evening.

Mohammad Mobashir Rahman scored a 41st-minute goal which proved to be the difference between the two sides, ending JFC's five-game winless streak and keeping their playoff hopes alive.

Stuart Baxter made two changes from Odisha's 1-1 draw against Bengaluru, handing a start to Bradden Inman who had joined on loan from ATK Mohun Bagan. Paul Ramfangzauva was the other change in the playing XI. For Jamshedpur, center-back Peter Hartley returned from injury and Mobashir replaced Aitor Monroy.

The game needed some magic

Arshdeep Singh has been having an excellent campaign this year for Odisha and the custodian was called into action early on. Seiminlen Doungel dispossessed Rakesh Pradhan and, on entering the penalty area, forced a save from Singh.

Odisha should have scored in what would have been a well-worked team goal. Ramfangzauva set Jerry Mawihmingthanga through in the Jamshedpur penalty area, and the latter beat a market before losing possession to Narender Gahlot. The ball rolled towards Manuel Onwu, who fumbled in front of the goal, before being cleared out for a corner.

The Jamshedpur defenders were at their best despite being under a lot of pressure. Stephen Eze and Hartley managed to thwart the danger posed by their opponents. Going forward, their attack looked dangerous too.

Doungel was impressive for JFC and may have finally found a place that could get the best out of him. He nearly assisted a goal at the half-hour mark but Farukh Choudhary struck over the bar.

JFC finally broke the deadlock in the 41st minute through Mobashir. The youngster put in a cross for Nerijus Valskis, whose movement in the box confused Singh, and the ball went straight into the goal. The Odisha keeper should have done better.

Doungel continued to trouble the Odisha defense after the restart. After getting the ball on the flank, he cut inside and tested Singh, who pushed the ball out for a corner. But JFC failed to take advantage of the resulting corner.

Singh was called into action once again when Alexandre Lima tried his luck from a distance only to see his effort saved.

OFC kept attacking but poor passing in the final third saw them lose possession and hardly test the keeper. At the other end, Singh kept his side in the game with yet another save to deny Choudhary.

Odisha had a late penalty claim when Diego Mauricio was tripped in the area by TP Rehenesh, but the referee turned down the appeal. It could just be the beginning of the end for the Kalinga Warrior boss.