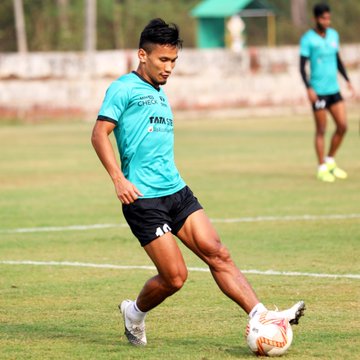 With their playoff hopes over and with one final game to go, Jamshedpur FC and Bengaluru FC will be aiming to end the Hero Indian Super League season on a winning note as they face each other at the Tilak Maidan Stadium, on Thursday.

Lack of consistency over the course of the season has cost both sides a playoff berth.

Owen Coyle's men currently find themselves sixth on the table, two points above their opponents. While a draw would be enough for JFC to finish sixth, a defeat could see them lose their spot to Bengaluru.

In the previous fixture, JFC stunned the Blues with Stephen Eze's goal separating the two sides.

They would be hoping for more of the same and will certainly be riding high on confidence after derailing Mumbai City's hopes of grabbing the League Winners Shield, after a 2-0 win over the Islanders.

The Blues will be looking to end the season on a high when they take on Jamshedpur FC at the Tilak Maidan tonight. @NewIndianXpress previews #JFCBFC.#WeAreBFC #MediaWatchhttps://t.co/QBFqdhNfR4

"We want to replicate the performance we showed against Mumbai City," Coyle said.

"We came very close to achieving those playoff (spots) so we want to finish on a strong note. To do that, we have to play very well and try to win three points. Bengaluru still have the AFC (Cup) to play, they will be very focused, so we will have to be ready for the challenge."

For Bengaluru, this is the first time that they have failed to qualify for the ISL playoffs. Their chances of reaching the top four appeared grim ever since Carles Cuadrat's departure midway during the season. But despite a lack of wins, interim coach Naushad Moosa was proud of the way his side fought till the end.

"The consistency was not there but we were always positive, trying to see if we can make it (to the playoffs) with whatever strength we had," he said. "We always wanted to win because no one wanted to accept that we are not a good team or that we cannot make it. We were always trying to give our best."

Injured Biswa Darjee will miss the game for BFC alongside Ashique Kuruniyan, who is serving out a suspension. On the other side, Nerijus Valskis will also miss out due to suspension.

Moosa, who has fielded as many as eight youngsters this season, said he will be looking to give them more game time in their final league game.

"We are playing a good team and a coach who is very experienced," he said. "It's important that we have a balanced side but yes, we'll have more youngsters playing tomorrow."