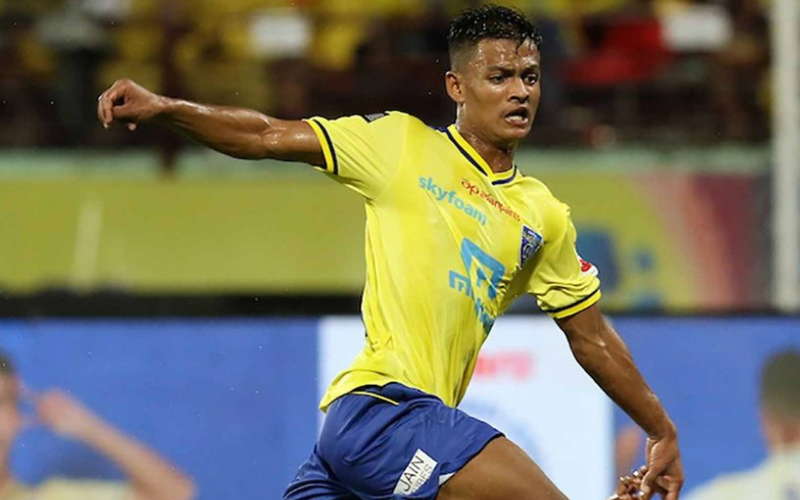 Jeakson Singh scored a dramatic late equaliser as Kerala Blasters snatched a point after a 1-1 draw with SC East Bengal at the at the GMC Stadium.

Both Kerala and SCEB, targeting a first win, made four changes apiece to their starting eleven. The contest got off to an electric start with both sides keen to grab the opener from the first whistle. Although Kerala shaded possession in the first half, it was SCEB who created better opportunities and deservedly grabbed the lead, heading into the break.

The first big chance of the game came SCEB's way during the ninth minute as Albino Gomes was called into action early on. Haobam Singh, making his debut, received the ball outside the box and attempted to place his shot towards the far corner. But his shot was saved by Gomes.

Two minutes later, Kerala missed a great opportunity to grab the lead via a set-piece. Facundo Pereyra whipped in a fine cross from a corner and the ball fell towards an onrushing Costa Nhamoinesu, whose header clipped the top of the crossbar.

However, SCEB soon made amends for the early missed opportunity as they broke the deadlock first. Jacques Maghoma threaded in a ball for Mohammad Rafique in the box. The latter attempted to square the ball for Anthony Pilkington at the far post. However, the ball trickled into the back of the net after striking Bakary Kone, who had put in a dive to clear it out.

Kerala made three substitutions at the break with Sahal Abdul Samad among those brought on. The changes proved effective as Kerala started the second half strong.

Kibu Vicuna's men nearly drew parity in the 51st minute when another big chance went begging. Kone leapt high to meet Pereyra's cross but his header only managed to find the side netting.

Kerala thought they had grabbed the lead in the 70th minute but were denied by SCEB keeper Debjit Majumder. Sahal pounced on a loose ball that was cleared away and headed it towards substitute Jordan Murray. The striker displayed great control and struck it on the volley but Majumder pulled off a stellar save to keep his side in the game.

Maghoma had the chance to put the game to bed during the dying minutes but saw his effort saved by Gomes. It would come back to haunt them as Kerala popped up with a late equaliser. Jeakson headed in Sahal’s cross to save his side the blushes.