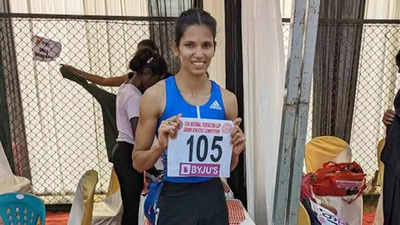 The 22-year-old Jyothi Yarraji clocked a National Record 13.23 seconds in winning the 100m Hurdles in the Limassol International in the Tsirio Stadium in Cyprus on Tuesday.  Her time is not only faster than the mark set by Anuradha Biswal in New Delhi on August 26, 2002, but also the fastest this year by a non-Japanese Asian hurdler.

Jyothi clocked better times in the All-India inter-University Championships in Moodbidri (13.03) and the Federation Cup in Kozhikode (13.09). While the first came in a competition outside the purview of AFI, the latter was wind-aided. Her time in the World Athletics Continental Tour – Challenger event in Limassol will enable her to own the National Record.

As recently as on Sunday, Annu Rani rewrote the National Record in women's Javelin Throw for the eighth time when she won the title in the Tata Steel fourth Indian Open Javelin Throw Competition in the JRD Tata Sports Complex in Jamshedpur. She raised her mark to 63.82m, a 58cm improvement over her erstwhile record set on March 15, 2021.

A couple of days earlier, in the World Athletics Continental Tour – Bronze Track Meet in JSerra Catholic High School, San Juan Capistrano, Avinash Sable rewrote the men's 5000m National Record. The 27-year-old Sable clocked 13:25.65 in only his second race over the distance to break Bahadur Prasad's record of 13:29.70 set in Birmingham on June 27, 1992.

"The rewriting of the National Records is evidence of the progress of our athletes across a number of events in our sport," said AFI President Adille J. Sumariwalla. "As is the usual practice, National Records are ratified at the AFI Annual General Meeting after considering if these were achieved in meetings which match the conditions laid down for the purpose."

In the Limassol International on Tuesday, Lily Das won the women's 1500m in a time of 4:17.79 to double India's joy in addition to Jyothi Yarraji's victory in the 100m Hurdles.

INTERVIEW| Siddhanth Thingalaya: “Hurdles are part of life and you have to master the technique to overcome it”