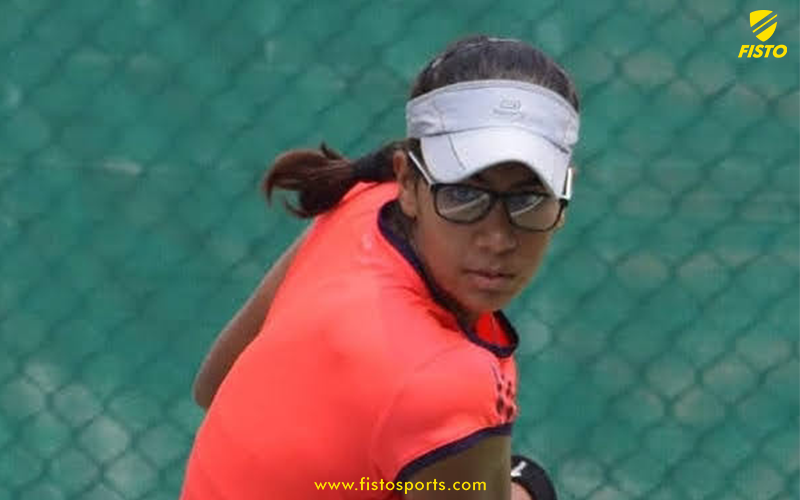 Being highly touted since winning the U-16 National Series in Singles and runner’s up in Doubles in June 2017, Kashish Bhatia has evolved as a player over the last few years and rapidly.

She began her tennis pursuits at the young age of 7. And the journey so far is no less than a rollercoaster ride where she enjoyed the highs and embraced the lows.

Kashish looked up to Roger Federer – she grew up worshiping the Swiss tennis maestro and closely studied his playing style to better her own performances.

On the national circuit, Kashish is quickly climbing up the ladder of recognition. But the 18-year-old has made her presence quiet felt in the recent years and has done so playing tennis which is easy on the eye.

She is also full of confidence, that essential trait among the best athletes. Boasting a tall and strapping figure, quick across the court and with the penchant for making things happen, it’s still early days in her career but she remains one to keep an eye on. But there is a steel and determination to her game too, fighting till the end and next couple of years will be crucial to determine her future prospects.

How did tennis happen? Did you play any other sports growing up? And how would you define your journey till now?

My next-door neighbor was a national player. Judging me by my good height, energy and enthusiasm her mother took me to her academy where I tried to play tennis with her old racket. At the age of 7, that was the start of my tennis journey. Growing up, I participated in a lot of sports namely, basketball, table tennis, athletics at school and zonal level. The journey is no less than a rollercoaster ride where I enjoyed the highs and embraced the lows.

Who was your favorite player growing up? They’re probably still playing.

My favourite tennis player has always been Roger Federer.

How do you control nerves during a long rally?

During a long rally, I try to keep the ball in play and focus on the quality of the ball I hit instead of focusing on the score or the point.

Earlier this year, I was awarded the title of Manav Shreyasi which indicated the best Student of the school for overall excellence in academics and sports at the time of the farewell.

On your playing career so far, which was the highlight of your career?

After winning a National Series tournament in June 2017, I had to skip the remainder of the season because I was suffering from typhoid. After recovering from it, I was diagnosed with Dengue the very next day. I started competing in tournaments again in April 2018. Within a year, I rose to a national ranking of 3 which I believe has been the highlight.

Many players have routines, habits and superstitions when the travel and play Tennis. Do you have any individual quirky things you do before a game or special item you carry with you in your bag that must go with you everywhere?

Before leaving for a match or a tournament, I give a high five to my dad and before entering the court, I always keep my right foot in first. I have a pre-match playlist that I hear while warming up for the match. I also have a diary that I always have in my kitbag.

I like to paint and read books. I also love to binge watch Harry Potter movies.

On the never-ending debate of…Is tennis more of a physical game or mind game?

It is a combination of the two. Physical strength cannot guarantee you success. It takes more than muscle, practice and determination.  It takes the mind of a champion.

Who do you regard as the all-time best player?

Roger Federer without a doubt.

What’s the next tournament you eagerly waiting to compete and win?

Although it has been postponed, I am eagerly waiting to participate in the Fenesta Nationals.

My current plans would be to get back in shape and prepare for the tournaments once the pandemic is over.

Poster with an autograph of Roger Federer.

Chak de India. When they scored the winning goal. Also, while watching the Pursuit of Happyness.

Not exactly a word but it would be “I am hungry.”