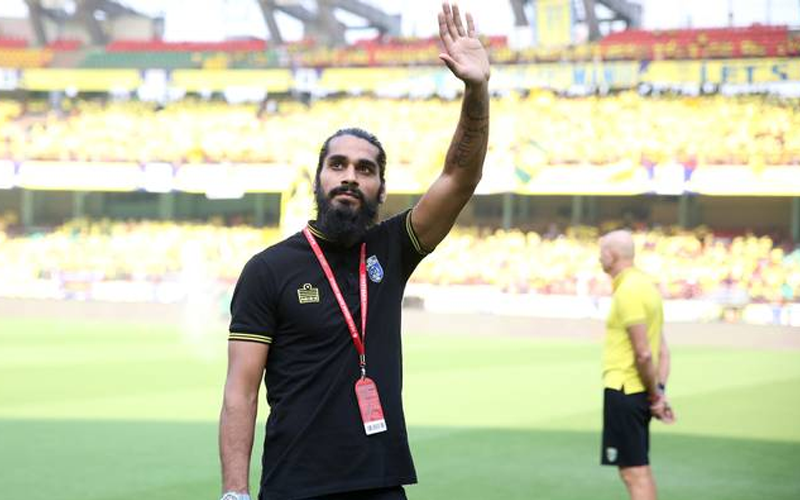 After six years of hard work and dedication, the Kerala Blasters and Sandesh Jhingan have mutually agreed to say goodbye.

Kerala Blasters have announced that they have agreed to part ways with fan favorite Sandesh Jhingan.

Jhingan has been with the Blasters since the club was established in 2014. Kerala Blasters have permanently retired the number 21 jersey as part of the defender’s contribution to the club.

To many this may come as a shock, as a player it is very difficult to be able to find a spot on the starting 11 and play a full 90 minute match. With the strength and depth of their roster comes benefits and troubles. Fondly referred to as ‘The Wall’ by fans, Jhingan has always displayed immense passion and enthusiasm both on and off the field. Since his ISL debut in 2014, in which he won the ISL and AIFF Emerging Player of the Year, he has gone on to establish himself as a full India International.

“It was great to be a part of Kerala Blasters right from Day one. We’ve built some great memories together as we helped each other grow but have finally decided to part ways. I wish all the good luck to the club going forward. A special mention to the people of Kerala who have always stood behind the club no matter what, I want to thank you from the bottom of my heart for all the love you have shown myself and Kerala Blasters. I am sure you will continue to support the club in the future as well. Both the club and the fans will always hold a special place in my heart. Thank you!,” Jhingan was quoted as saying by the ISL.

The Chandigarh-born centre-back has made 76 appearances for the club, becoming their most-capped player. He, however, missed the whole of the 2019-’20 ISL season due to an injury.

Nikhil Bhardwaj, owner of Kerala Blasters said that Jhingan was very respected and that they were extremely thankful for what he did for the club.

“We would like to take this opportunity to thank Sandesh for his commitment, loyalty, and passion for the club and its supporters. Kerala Blasters respects Sandesh’s desire to pursue a new challenge and we wish him all the best for this new journey. We know that he will always remain a Blaster at heart. As a tribute to his contributions to the club, we will be permanently retiring his jersey number 21,” he said.