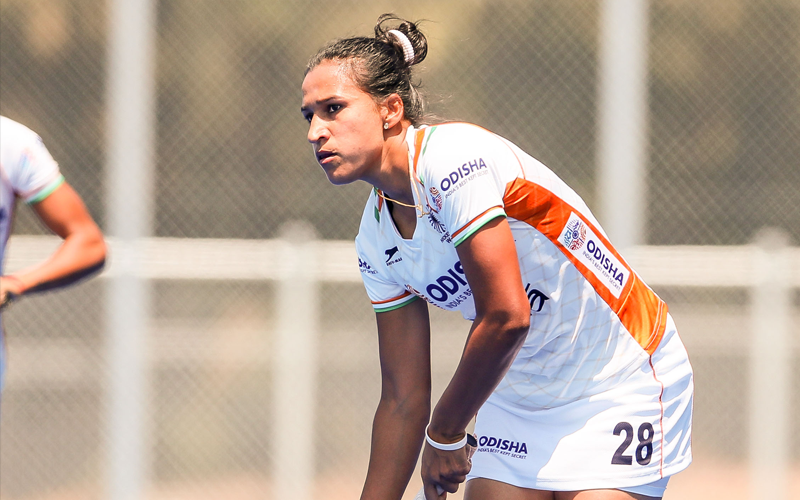 The Women's Hockey Team feels teammates have been her biggest support.

Indian Women's Hockey Team Skipper Rani on Wednesday stated that she feels extremely honoured for being nominated by Hockey India for the Rajiv Gandhi Khel Ratna Award. "I feel very honoured for being nominated for the prestigious Rajiv Gandhi Khel Ratna Award. I am overwhelmed that Hockey India has recommended my name for the top award and their continued support always encourages the team and I to do well," expressed Rani, who is a recipient of the Padma Shri Award.

Hockey India on Tuesday also announced the nomination of both Vandana Katariya and Monika from the Indian Women's Hockey Team and Harmanpreet Singh from the Indian Men's Hockey Team for the Arjuna Award. Extending her congratulations to her compatriots Rani said, "It is fantastic that we have two players from the Women's Team being nominated for the Arjuna Award. I congratulate both Vandana and Monika, they are very deserving of this recognition. I also feel that two players being nominated goes to show that Women's Hockey is moving in the right direction and this will only motivate us to do better on the world stage."

The period of consideration for the Rajiv Gandhi Khel Ratna Award is between January 1, 2016 to December 31, 2019. In this while, Rani has led the Indian Women's Hockey Team to historic victories in the Women's Asia Cup in 2017, Silver at the 2018 Asian Games and played a critical role in the FIH Olympic Qualifiers in 2019 by scoring the deciding goal that helped in India's qualification for the Tokyo Olympics. The Indian Women's Hockey Team also climbed to a career-best FIH World Ranking of No.9.

While some of these feats will be cherished by the team for a long time, Rani feels the turning point for her was the team's first-ever appearance at the Olympic Games. "I personally feel the Rio Olympic Games was a turning point for us. We were dismal in our performance and we knew we had to really work hard if we wanted to do well at the world stage or even at the Asian level. Having that singular focus in mind, we started working towards being known as a tough team, a winning team and not as the underdogs," she said without mincing words.

She further stated, "Confidence played a huge role in our transformation. Having a brilliant support staff led by Chief Coach Sjoerd Marijne who always encouraged us to 'Speak Up and be Bold' started showing in our game. A lot of credit for our success goes to the Support Staff who always backed us no matter what."

She further stated the collective support from the hockey fraternity will ensure that Indian Women's Hockey achieves something special on the world stage. "These are difficult times (referring to Covid-19 pandemic) for all, but we have come closer as a team in this period. It is great to constantly be backed by my family no matter what the circumstances are and I also thank the hockey fraternity for being very supportive. I have received a lot of messages and good wishes during the nationwide lockdown and it is this support that will ensure we comeback in a strong way," emphasised Rani who is currently based in SAI Centre, Bengaluru along with all the Senior Women's Core Probables Group.