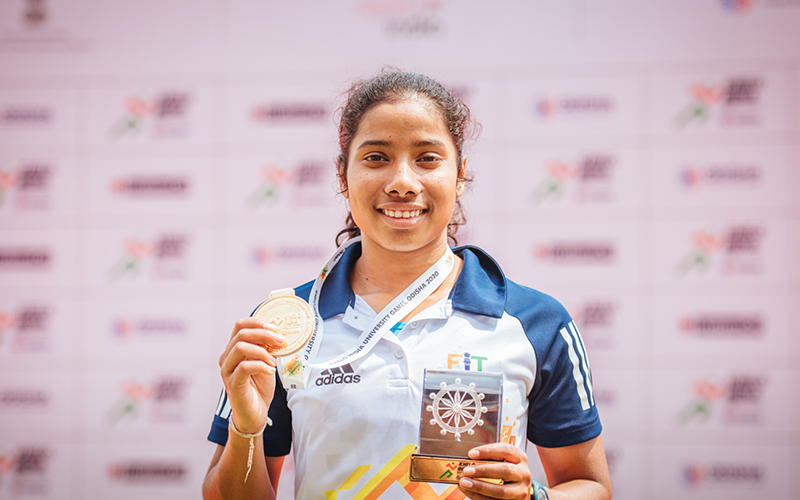 Out here in Odisha, it is tough to shake off the overarching, forever looming figure of Dutee Chand, a national champion, a local legend and a crowd favourite everywhere.

But on the first day of the athletics events in the Khelo India University Games 2020 here on Friday, Manisha Merel did exactly that, hogging most of the attention.

The Sambalpur University long jumper was the unquestioned star of the day, annihilating the field to win the women’s title with a 6.22m leap.

Nineteen-year-old Merel, a Political Science student and a Khelo India scholar, is an accomplished junior athlete, and her class was evident right from the start.

Four of her five successful jumps in the competition, in fact, were good enough for the gold while her winning attempt was over a foot better than silver medallist Harshini Saravanan.

“I was hoping to break the record today, but sometimes things don’t fall into place perfectly,” Manisha said, having missed the All-India University record by a mere six centimetres.

“The competition was tough though and I’m happy with the gold. This repays the faith the Khelo India scheme has put in me,” she added.

Merel comes from a small village in Keonjhar district, the fifth of six children in her family. The youngest girl in the farming household, she was always involved in sport right from a young age, trying her hand at football, kho kho, before finally settling on athletics. She was a sprinter as well as a long jumper for most of her early career.

Spotted by various coaches at different levels she was enrolled in the SAI Academy in Sundargarh, when she was 10 and it was there that she refined her long jump. “I used to do the sprint, and the coaches felt I had the kind of explosion necessary for the event,” she said. "So they decided to enter me in both competitions at smaller meets."

Her coach at the academy, Sanjay Garnaik, sees a bright future for the long jumper, but also cautions against too much expectation.

“She is a young athlete, and as such her development curve will be incredibly steep and then plateaus out,” he said. “Over the past year there has been a massive improvement in her personal best, almost 10-14 cm. It’s due to a variety of factors, the single focus on one event, better facilities and regular competition have helped.…”

With a gold under her belt, Merel has her sights set higher for now, starting with the Asian Junior Athletics Championships in Singapore later this year.