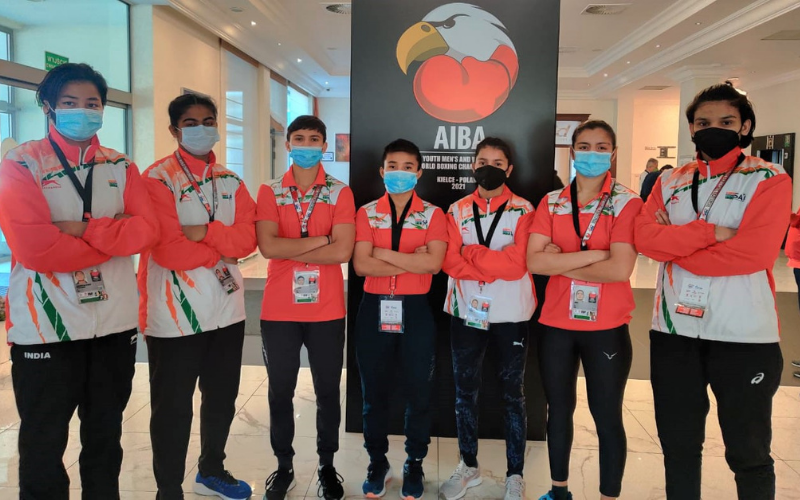 At the ongoing AIBA Men's and Women's Youth Boxing World Championships, Indian pugilists had a dominating run with an unprecedented 11 medals confirmed in the competition. With 7 Indian Women Boxers in final, India tops the table in Women's competition and in the overall championship, India and Russia are joint top with 8 medals.

Gitika hailing from Haryana fights in 48Kg light fly category and is swiftly defeating her hurdles on her way to success. With the goal to win Gold, Gitika has trained herself hard and have dominated over her brawny opponents. She displays brilliant techniques and precision while challenging her opponent which is considered as one of her most powerful quality.

Belonging to the scenic state of Manipur, Baby Chanu is ready to get ferocious for her upcoming challenge at the finals of AIBA Youth Men's and Women's World Championships in Poland. Hailing from a boxing family, she was determined to take ahead the family legacy and started training herself from the age of 12.  Her passion towards boxing and the attitude to never quit ensures that she will soon make a giant leap to success.

Poonam is India's featherweight (57Kg) youth player who only aims to win the bout. She is a fast paced learner; with the engulfing desire to make a mark in the sport of boxing. She trusts her coaches and attributes her success to them. She challenges herself and pushes herself till she tastes the joy of success.

Fierce and adamant to achieve her dreams Vinka (60Kg), a promising Indian Boxer, is among the few who soon made their names to the charts. Coming from the village of Simla Molana, Panipat, where she was constantly pulled down by the stereotypical gender specific perspectives, the young boxer struggled her way to the finals of AIBA Youth Men's and Women's World Championships

Vinka has won several Gold medals consecutively for two years (2017-2018) and has been showcasing her potential in several national and international boxing championships. In the year 2019, she had won Gold - 64 kg. at the ASBC Youth Asian Men & Women Championship which was held in Mongolia.

Arundhati , a strong willed person who is constantly thriving and conquering in the combat sport of boxing has made it to the finals of AIBA Youth Men's and Women's World Championships. A three-time gold medal winner at the Khelo India Games successfully climbed the stairs to success in a short-span of her young career. Her skills and extensive training has led her to bag gold in 60kg, 66kg and 69kg at different national International tournaments. Her successful performances got noticed by the boxing fans globally which got her the title of Best Asian Junior Women Boxer in the year 2018.

T Sanamacha Chanu is a trainee of MC Mary Kom Academy in Imphal, who idealizes the legend and aspires to carry the name of India in boxing to a new peak. She has been a star of the ASBC Youth Asian Men & Women Championship as she was among the five women boxers who won the gold medal last year. She has been constantly training herself and pushing the limits to continue her success.

The young boxing sensation is fighting her way with her full force. Known for being as one of the most fierce and strong young boxer, she doesn't hold back to punch down her opponents. She is a pro and fast enough to bring them down in just 30 seconds. Born in an orthodox family, it was a never easy for her to even take the initial steps. However, her persistence towards the sport won against her reluctant family and now she plans to only move forward. Her career took off when she won Gold in the Asian Junior Girls Championship in 2019 and currently aiming to bag a Gold at the ASBC Youth Asian Men & Women Championship.

Hailing from a humble farmer's family, Sachin's journey to the world of Boxing was through his Uncle's support. His desire to be a boxer and play for India turned to a reality when he was introduced to a boxing coach and with his uncle's encouragement, who is also a sportsman, his journey began and now there is no looking back. He was trained at Sports Authority of India (SAI) and he had won Bronze medal in AIBA Junior Boxing World Championship held in Russia, alongwith other championships at national and international level.