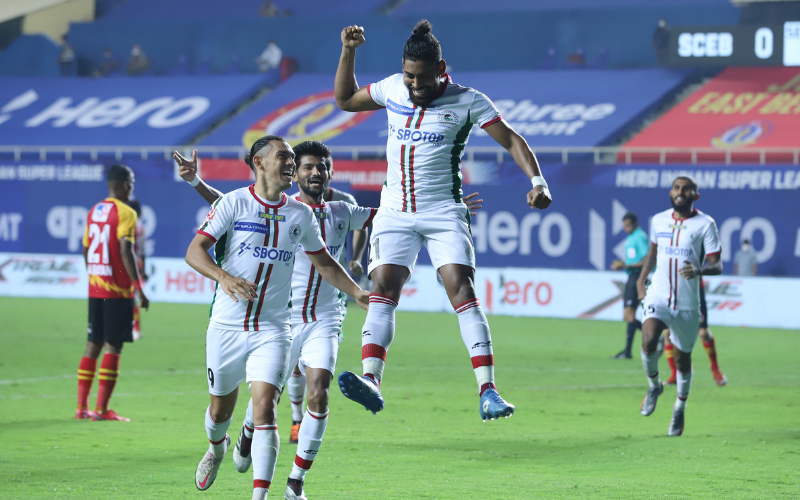 ATKMB coach Antonio Habas made three changes to the eleven that featured in the opening win against Kerala Blasters with David Williams, Jayesh Rane and Subhasish Bose coming in. Meanwhile, SCEB coach Robbie Fowler sprang a few surprises with Jeje Lalpekhlua and Eugeneson Lyngdoh starting on the bench.

The first half proved to be a cagey contest with either side failing to break the deadlock. SCEB dominated possession early on but barring one opportunity, they failed to threaten the ATKMB backline. Habas' side came close to grabbing the lead early on in the ninth minute when Prabir Das' attempted cross from the right flank hit the roof of the crossbar before ricocheting off.

Jacques Maghouma also had a chance to put SCEB ahead around the half-hour mark when Narayan Das whipped in a cross from the left. The Congolese leapt high but directed his header wide.

Despite SCEB taking the game to their opponents, it was the Mariners who came close to taking the lead in the 36th minute.

A throw-in found Javi Hernandez, who swivelled beautifully to create space for himself and shoot towards goal. SCEB keeper Debjit Majumder reacted with a fine save. Moments later, there was an opportunity for SCEB. Surchandra Singh found himself on the right flank and delivered an inch-perfect cross for Balwant Singh, who missed the target.

East Bengal need to put the defeat behind them

It didn't take long for ATKMB to open the scoring soon after the drinks break. SCEB's defense was in disarray and the Mariners punished them with Krishna finding the net once again. ATKMB found space through the middle before Hernandez laid on a pass to Krishna outside the box. The Fijian took a touch before firing in a powerful shot that was enough to beat Majumder.

The Red and Gold pushed hard for an equaliser in the dying minutes with Anthony Pilkington coming close on two occasions. However, ATKMB put the game to bed with Manvir getting his name on the scoresheet with a fine goal. The striker received the ball on the right flank and made a solo run into the box. He cut inside before drilling his shot into the top left-hand corner.