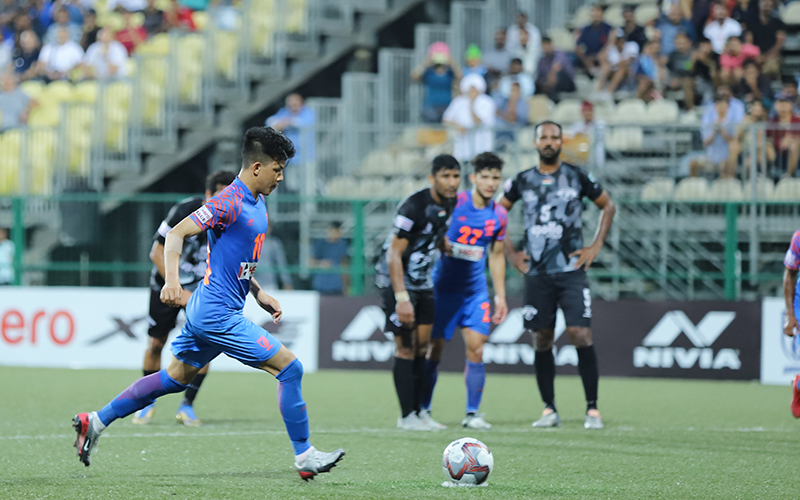 All India Football Federation’s (AIFF) developmental side Indian Arrows earned a dramatic 1-1 draw against second-placed Punjab FC at the Cooperage Stadium in Mumbai.

Hero I-League veteran Sanju Pradhan opened the scoring in the sixth minute before Givson Singh’s stoppage-time penalty in the second half ensured a point in what was a grand-stand finish to a thoroughly exciting affair.

Arrows Head Coach Shanmugam Venkatesh sported wholesale changes to his line-up, making as many as seven. Ajin Tom, Hendry Antonay and Saurabh Meher were reinstated to the four-man backline. Ayush Adhikari started in the heart of the midfield while Harmanpreet Singh and Gurkirat Singh spearheaded the Arrows attack.

The visitors struck early, albeit with a stroke of good fortune. In the sixth minute, Sanju Pradhan’s set-piece delivery from distance was miscued by Arrows keeper Samik Mitra, who completely missed the ball with his attempted punch and subsequently, he saw it bulge into the back of the net.

Punjab continued to make good use of possession and had their game plan chalked out well, frustrating the home side to perfection. To make matters worse for the Arrows, they were dealt an injury blow early on in the 22nd minute and had to take-off forward Gurkirat Singh, with Aman Chetri coming on as his replacement.

Substitute Chetri carved a decent opportunity for himself in the 32nd minute, having made a good run to leave his marker trailing but his finish let him down, blasting his shot wide off the woodwork. Law’s men closed out the half, thoroughly making better use of the ball to head into the breather with their noses in front.

Punjab had a ‘heart in their mouth’ moment after the game resumed, when Anwar Ali’s wayward back-pass was latched onto by a lurking Harmanpreet Singh in the 51st minute but keeper Kiran Limbu was alert and made the intervention just in time to thwart the momentary peril.

Dipanda Dicka, who is on the brink of history with 49 Hero I-League goals to his tally, had a great opportunity to grab his 50th but his goal-bound shot from close range was blocked in the 63rd minute and the resultant ricochet was fired wide by Sanju.

The writing seemed to be on the wall for the Arrows as Punjab neutralized any and every offensive proceedings from the hosts, but the drama hadn’t unfurled yet.

The Arrows piled on the pressure towards the dying minutes and in the first minute of stoppage time, Ajin Tom’s delivery from the right was tracked down well by substitute Manvir Singh but he was stopped in his tracks by Anwar Ali. The referee, straightaway, pointed to the spot, awarding the hosts a lifeline from twelve yards. Ali was booked for his challenge whilst Givson Singh stepped up for the spot-kick and found the net with fine aplomb, sending Limbu in goal the wrong way.

The full-time whistle shortly afterwards confirmed the spoils being shared. Punjab remain second on the table with 23 points now, while the Arrows add a point to their tally to have nine points.

Indian Arrows’ Givson Singh was adjudged to be the Hero of the Match.