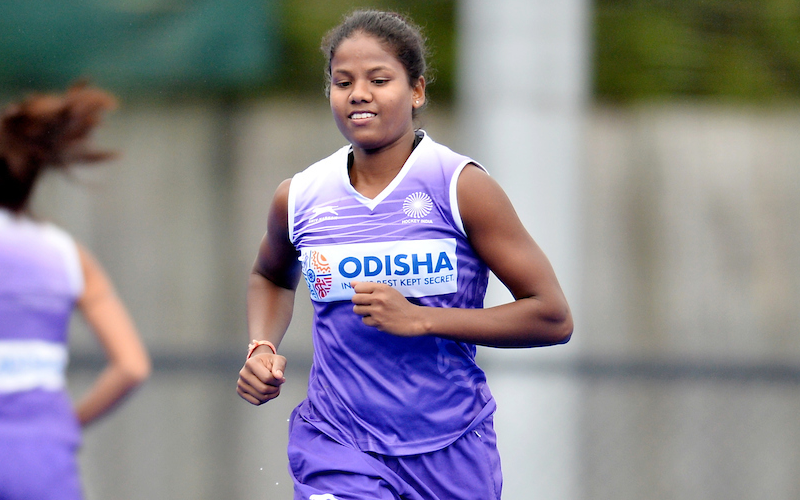 Namita Toppo: 'Lengthy spell on the sidelines made me stronger'

The experienced Midfielder also added that winning an Olympic medal would be a dream come true for her.

With both the Indian Men and Women Hockey Core Probables currently at the Sports Authority of India, South Campus here in Bengaluru, players from both teams have got time to reflect on the recent future, and realign their individual goals as well as collective goals.

One of those players is the experienced Namita Toppo, who commands the midfield for the World No. 9 Indian Women's Hockey team. The 24-year-old who had completed the feat of winning 150 International Caps for the country in July 2018, returned to the side after a lengthy injury lay-off only in September 2019, and has since focused on catching up to speed with her teammates.

"I was really struggling when I was away from the team. It was close to 9-10 months that I was out of the side, and was nursing my injured knee. I had injured my meniscus, which basically means I had torn my knee cartilage during the Asian Games 2018. I was really worried at first because I was not sure how long it would take for me to come back, especially with the Olympics only a couple of years away. But when I look back now, I think that lengthy spell on the sidelines made me stronger," said Namita.

"Initially it was really tough because I would have immense pain, and would wake up at night, and start to overthink. I believe my teammates and Coaches played a huge role in making sure I was in the right frame of mind," she added.

As an athlete who was aiming to take part in her second consecutive Olympic Games, Namita's journey back to the Indian team was full of ups and downs. "At first I didn't realise I would be spending about 9-10 months outside, but our Scientific Advisor Wayne Lombard told me that the type of meniscal injury I had was accompanied by some early onset degeneration - which made things complicated, and it increased my recovery period. It was tough because I would keep thinking if I would ever make it back to the squad. But I spoke to my teammates who had spent similar periods on the treatment table, and I would get some sort of strength," said the Midfielder from Rourkela, Odisha.

It was in September 2019 when Namita finally returned to the Indian team, and the shy midfielder calls it one of the most satisfying days of her life. "When I was finally fit and had regained my touch and sharpness in the National Camp, and was included in the squad for England Tour, I was really happy because I had set a target for myself and I was able to achieve it. I wanted to help my side qualify for the Tokyo Olympics, and playing in the England Tour gave me a chance to prove to Chief Coach that I should be in the team for the FIH Hockey Olympic Qualifiers, which were to take place in November 2019," said Namita, who eventually helped the Indian team in qualifying for the Tokyo Olympics.

Namita, who now has more than 165 International Caps for India, also spoke on the postponement of the Olympics and how it affects her. "Our target was always to win an Olympic medal, and even with the postponement, that does not change. It definitely gives us more time to be prepared for next year, and to perform really well. I feel our team is also fortunate enough to not have any ageing players, and this group of players has been playing together for a long time, and I believe one more year of experience will only help us in achieving our goal," said the winner of the Hockey India Asunta Lakra Award for the Upcoming Player of the Year 2014.