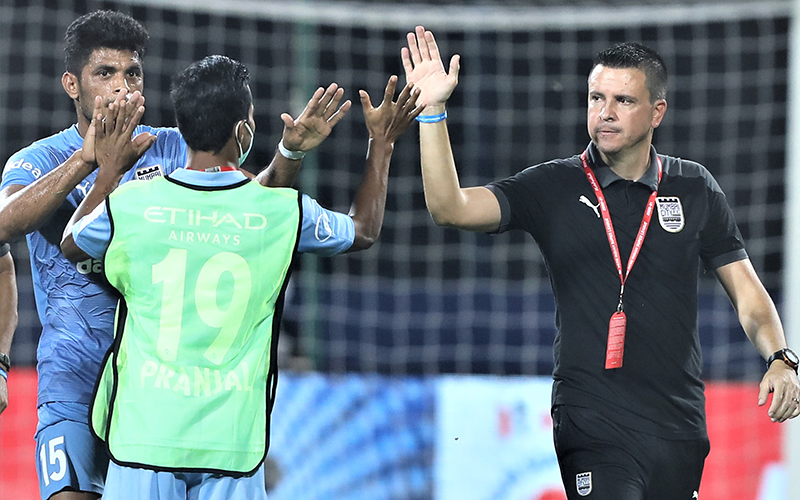 When City Football Group invested in India, Mumbai City FC could have got anyone from its extensive network to helm the vision. However, Sergio Lobera emerged as the sensible option - a man who already had a grasp of the league, playing a substantial role in the rise of Indian football in the last couple of years.

Three years of managing FC Goa had made Lobera synonymous with a specific style of play. The Spaniard's philosophy comes from the same hymn sheet — possession, passing, the need to entertain. The only question, though, was whether he would be able to impose his vision on a new team, especially considering the shortened pre-season he had with them.

As the Hero Indian Super League heads into the new year, the answer to that question is a resounding yes. There were doubts raised when his heavily-fancied Mumbai team succumbed to NorthEast United on the opening day of the league. But Lobera has not lost in the league since. His Mumbai team sits second in the table with a game in hand over toppers ATK Mohun Bagan who lead them by just one point. Just below them with two points less is his former team Goa, who have played two games more. At this juncture, it would be a surprise if Mumbai were to miss out on the playoffs.

But even more impressive than where Mumbai sits on the table is how Lobera has got them playing. After seven games, they have most of the hallmarks of a Lobera side. They are yet to be dominated in terms of possession in any of the games that they have played. Domination is perhaps the only word that can do justice to the way they've held on to the ball in some of these games. Against Odisha FC, they saw 66 percent of the ball. Against Jamshedpur FC, the corresponding number was 64.

Mumbai are also outpassing the rest of the league. All their games have seen them weave together more passes than the opponents while completing at least 70 percent of their passes. Against Odisha, they managed to complete a staggering 490 passes, 81 percent of what they attempted. Only Lobera's team Goa sit above them in terms of average passes per game. But when the two sides met, it was Mumbai who dominated the passing statistics.

The fact that Lobera has managed to get them playing this way in such a brief period of time is even more impressive when considering how Mumbai were playing last season. In 2019-20, the team's passing statistics were the worst in the league, attempting just over 337 passes a game. And now, they are at the opposite end of the spectrum.

Of course, Lobera's task was made a lot easier by the fact that the City Football Group, who took over Mumbai last year, backed him with all the players he needed. Both Hugo Boumous and Ahmed Jahouh, who worked with Lobera at both Moroccan club Moghreb Tetouan and Goa, followed him to Mumbai as well, as did a host of other Goa players. This influx of players, who were familiar with how Lobera played, arguably made it easier for him to impose his philosophy on Mumbai. Further additions like those of Adam Le Fondre and Cy Goddard made the Mumbai roster a truly intimidating one for opponents.

Of course, there are chinks to be ironed out for Lobera. Nothing exemplifies this better than the game against Jamshedpur. Mumbai dominated in every statistic — they had a man-advantage, 64 percent of the ball, and put in twice as many passes — but were still forced to settle for a point. For all the possession they had, Lobera's players only managed to have four shots on target.

Once those chinks are ironed out, 2021 promises to be a fruitful one for both Lobera and Mumbai.