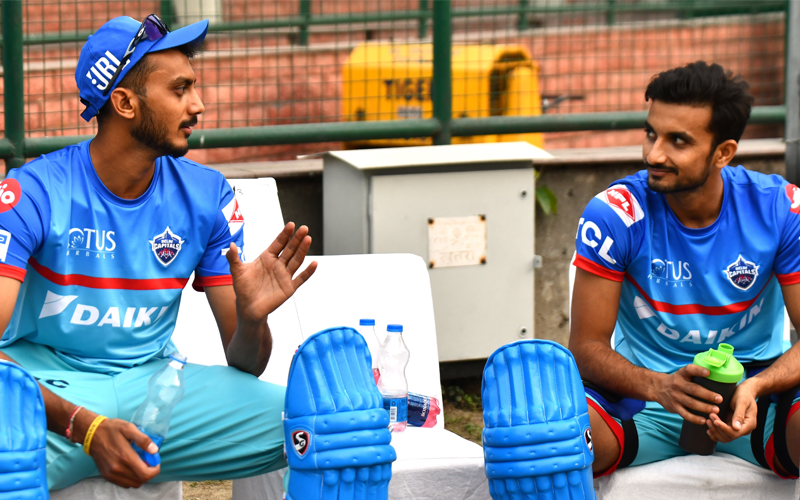 MAKING IT TO PLAY-OFFS IN FIRST SEASON WITH DELHI CAPITALS WAS GREAT, SAYS ALL-ROUNDER AXAR PATEL

The 26-year-old spoke about his first season with the franchise during an Instagram LIVE session with DC’s official handle.

Utilizing his time during the nationwide lockdown is Delhi Capitals’ Axar Patel, who believes staying positive about the situation is crucial. Speaking on the franchise’s official Instagram handle during a LIVE session, the all-rounder said, “I think the best we can do is think about all the positives - including when was the last time you spent so much time with family, and how you can now follow your hobbies, and interact with fans like I am able to do now. It is down to how we think about the situation, and I believe keeping a positive outlook is really important.”

The 26-year-old all-rounder was picked up by the Delhi Capitals in the IPL 2019 Auction for INR 5 Crore, and says he adjusted quickly. “I was sceptical at first because I had spent five years at the Punjab franchise, and I didn’t know where my future would lie. But I was following the auction, and when I was picked up by Delhi Capitals, I was really excited because the team had so many players I had played with before. It was a bit different in the first couple days when I joined the pre-season camp, but it took me no time to adjust into the team due to the mood in the squad,” said Axar.

Axar picked up 10 wickets and scored 110 runs in his first season at Delhi Capitals, and believes his adjustment into the team was also down to captain Shreyas Iyer. He said, “I’ve played with Shreyas at India A also, and when I came to Delhi Capitals, it was really easy for me because we bond really well. On the field, he gives freedom to his bowlers, and lets you adjust the fields. He is quite patient as well, and I have really enjoyed playing under him.” Reflecting on his first season with the franchise, Axar commented, “I feel when you’re winning, the feeling is really different and the confidence is high. We had a great combination in our team, and the team environment was such that it brought out the best in all of us. When you have a great environment, then you end up playing great cricket also.” He added, “Making it to the play-offs in my first season with the franchise was great, and it made for a good start for me here.”

Asked on how Head Coach Ricky Ponting would reward a top-performing player with an exclusive badge, Axar said, “Ricky would give a separate Man of the Match Award in the dressing room for someone who used to contribute to the team.”

“I ended up winning it five times, and it ended up being a good recognition for me personally, and it felt good to have contributed to the team’s victories,” he signed off.