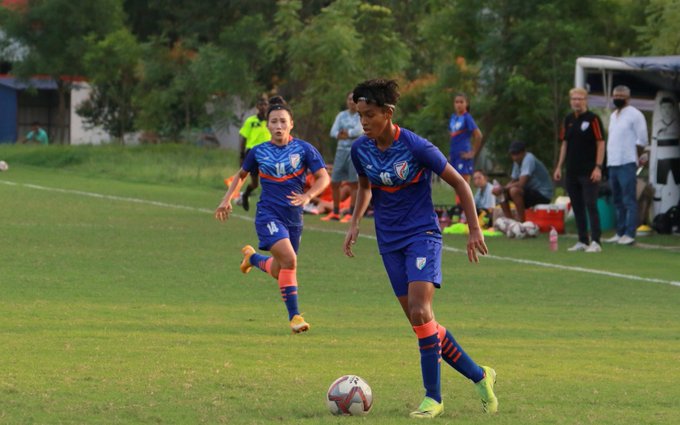 The name is Manisha, Manisha Kalyan. She is barely 19, a winger for the Indian Senior Women’s National Team, and has the rare, or rather sole distinction of being an Indian to have scored a goal against any Senior National Brazil side.

On Friday (November 26), Manisha, upon receiving a cushioned header from fellow forward Pyari Xaxa close to the halfway line, darted towards the Brazil box, sold a feint to her marker and fired a left-footer into the bottom corner. History! Dreams! Future!

"It was a dream come true for me to play against Brazil and to score against them was the icing on the cake," said Manisha, who, after the match, as seen posing for pictures with Brazil’s legendary midfielder Formiga Mota, who was felicitated by all parties present at the Arena da Amazonia after the game, as she hung up her boots.

"To be on the same pitch as her (Formiga) was a big deal. I hope we can learn from this experience and do better in the next game," added Manisha. "We always knew it was going to be difficult against a team of Brazil's quality. But as soon as we stepped onto the field, we forgot about the pressure. That is what we need to do in the upcoming matches and play with an open mind.”

Here's that moment Manisha Kalyan is unlikely to forget -- when she scored to level 🇮🇳 against the 🇧🇷 women's football team! pic.twitter.com/D6JRY0Xm5z

Like many female footballers from across the world, however, Manisha’s journey has been one of struggle, right from her early days in a small village called Muggowal, Manisha was up against the odds.

“I’ve been playing since I was 13, when I switched over from athletics to football after my coach Brahmji-sir asked me to change sports. The teamwork involved in football was really interesting to me, and I fell in love with this game,” Manisha recalled.

While not everyone from her village supported Manisha’s decision to take up the beautiful game, the pacey forward had the full support of her parents.

“Many in my village did not want me to keep playing. A girl playing football was just not acceptable to them. But my parents stuck right by my side and game me all the support I needed,” she informed.

The first time Manisha came into the National Team fold was in ahead of the BRICS U-17 Women’s Football Cup in South Africa, and the powerful attacker has never looked back from there.

“Yes, we had played Brazil in that tournament too, but that was a different kind of a game. Most of us were new to that level of football. But tonight’s match was a memorable one for us. Yes, we conceded a few goals in the end, but we held our own for most parts of the match, and that is a very important learning for us, heading into the AFC Asian Cup,” said Manisha.