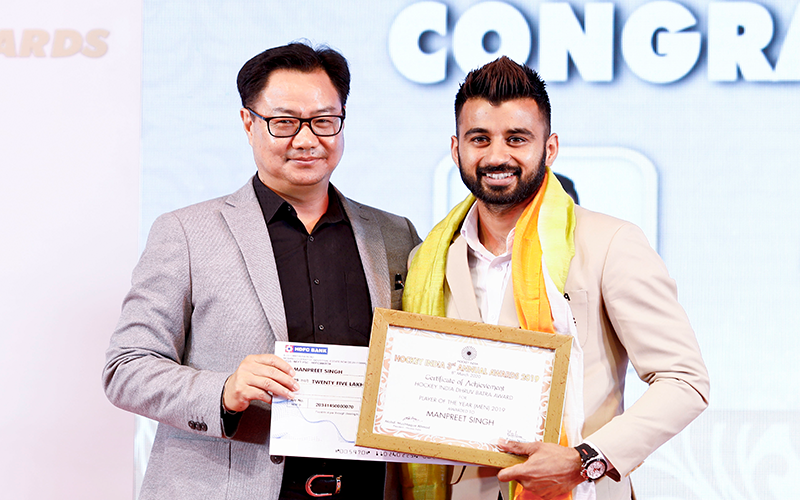 The much awaited Hockey India 3rd Annual Awards 2019 took place here in the capital city on Sunday which saw the National Federation celebrate the best hockey players and former greats of the game from India, in what was a glittering evening.

Opening the Awards ceremony, Mohd Mushtaque Ahmad, President, Hockey India, welcomed the guests and the players. “Hockey India has one clear mission, to provide the best infrastructure and environment to ensure our athletes prosper and reach their full potential. We have, over the years, worked tirelessly to achieve this, and the proof of success lies in our players and their stellar performances. I am happy to say our national teams have had a great 2019 which saw them achieve success against some of the best teams from across the world, and also saw them qualify for the Tokyo Olympics 2020. I would like to congratulate all the players, coaches and support staff present here today for their vision, passion, and the sheer hardwork they put in every day,” said Mohd Mushtaque Ahmad in his welcome address.

The first set of awards marking important milestone in the careers of players began the proceedings. The Milestone Awards were presented to Deep Grace Ekka, Kothajit Singh Khadangbam and Savita for completing 200 International Caps for India, with a cheque of INR 1.00 Lakh each plus a trophy presented to the three players.

Harmanpreet Singh, Lalit Kumar Upadhyay and Nikki Pradhan were awarded for turning out in Team India colours for the 100th time and were all presented with a cheque of INR 50,000 each and a trophy.

Indian Women’s Hockey Team Captain Rani was also awarded with a cash prize of INR 10.00 Lakhs for winning the prestigious World Games Athlete of the Year 2019.

In the second part of the Hockey India 3rd Annual Awards 2019 function, players who have excelled in the year 2019 were recognised. The winners of the 11 Annual Awards were:

Each of the above individual awards carried a cash prize of INR 5.00 Lakhs besides a glittering trophy.

Apart from this, the following awards were also presented:

Each of the above two players received a cash prize of INR 10.00 Lakhs and a trophy.

The day came to a climactic finish with the presentation of the most eagerly-awaited Hockey India Dhruv Batra Player of the Year Awards for Men and Women, and the Major Dhyan Chand Lifetime Achievement Award.

Dr Narinder Dhruv Batra, President, International Hockey Federation (FIH), President, Indian Olympic Association (IOA) and Member, International Olympic Committee (IOC) spoke before awarding the winners, “I would like to congratulate Hockey India for their continued efforts of raising the bar for Indian Hockey to the highest of standards. Hockey has always been a very important part of India’s sporting history, and I am delighted to see that the game still has a high following in our country across states and regions. I am really proud of the players of the Indian Men’s and Women’s Hockey teams, who have consistently been performing for the country. Today is a day when we salute your hard work and efforts, and I congratulate all the winners in advance for putting in exceptional performances last year.”

It was Mr. Manpreet Singh and Ms. Rani who walked up to a thunderous applause to collect the Hockey India Dhruv Batra Player of the Year 2019 for Men and Women respectively. The winners of the most prestigious player’s awards for 2019 walked off the stage with a glittering trophy and a cash prize of INR 25.00 Lakhs each.

The final award for the day, the Hockey India Major Dhyan Chand Lifetime Achievement Award 2019, carrying a cash prize of INR 30.00 Lakhs and a trophy, was given to Mr. Harbinder Singh for his outstanding contribution to the sport of hockey.

Mr. Harbinder Singh debuted in the Indian Hockey Team in 1961 at the age of 18 years and has an illustrious career in hockey that includes;

Mr. Singh has close to 60 years association with the sport of Hockey and continues to play an active role in Hockey off the field which includes;

“I am extremely happy and humbled to be receiving this Award which carries Major Dhyan Chand’s name. Hockey has always been my life, and I continue to live it each day with pride and passion. I am thankful to Hockey India and all my hockey friends for this recognition,” said Mr. Harbinder Singh, who accepted the Hockey India Major Dhyan Chand Lifetime Achievement Award 2019.

“I’m really honoured to have won the Hockey India Dhruv Batra Player of the Year 2019 (Men). It was a great year for our team, and I would like to dedicate this Award to my teammates and Coaches, without whom, I would not be holding this trophy. I would also like to thank Hockey India for their continued support, and I hope this Award will motivate, not only myself, but more players to give their best for the country and bring more laurels.” said Mr. Manpreet Singh.

“I am elated to have been awarded with the Hockey India Dhruv Batra Player of the Year 2019 (Women). I have always strived to work hard for my team and my country, and to have been recognised for doing the thing that I love doing the most, it gives me immense happiness. I would like to thank my teammates, Coaches, family and Hockey India for always being a huge supporter, and being the guiding light. I dedicate this award to my team.” said Ms Rani.

Do you think Indian Hockey team able to clinch a medal at the Tokyo Olympics?