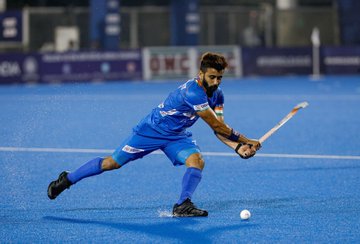 Kick-starting an all-important 2022, which will witness India fight for an Olympic berth at the 19th Asian Games in China later this year, Indian Men's Hockey Team Skipper Manpreet Singh expressed that his team is upbeat and are looking forward to an exciting yet hectic year of hockey. "This year is going to be quite exciting with back-to-back tournaments all year long. We begin the season with FIH Hockey Pro League matches in February. After almost two years, we will be returning to our favourite venue in Bhubaneswar where we will be playing double-header matches against Spain, Germany, Argentina and England," he said.

The team will report for the National Coaching Camp in SAI, Bengaluru today after a short break following their Asian Champions Trophy outing in Dhaka. Manpreet said this camp will be important to assess their performances from last year and also plan for the year ahead. "It was a very good ten-day break for all of us, spending some quality time with our families. I feel we have returned to the camp feeling mentally fresh and ready for the challenge ahead. We will be assessing our performances in 2021 with the Chief Coach and support staff and we will also draw up a road map for 2022,' added the midfielder.

Apart from a good outing in the FIH Hockey Pro League which will go on till June this year, India will look to seal a berth for the Paris Olympics with a first-place finish at the 19th Asian Games Hangzhou 2022. "Asian Games will undoubtedly be the biggest event for us this year. The Asian Champions Trophy was a good tournament to see the progress other Asian teams have made and from what we got to see, surely the competition will be quite tough at the Asian Games as all teams will be vying to make the Olympics cut," he opined.

The Men's Asia Cup is also scheduled for 2022, where India will defend the title and Commonwealth Games too is scheduled to be held in July. With a hectic season coming up, Manpreet emphasized on the importance of staying mentally fit. "It is very important for us to remain mentally fresh from tournament-to-tournament. Having faced the challenges of training and playing in a bio-bubble, we have become tougher together and going forward I think the team and support staff will collectively pay more attention to mental health."

"In all, we are geared up for 2022 and wish all the hockey fans a great year and appeal to everyone to follow all covid protocols, wear a mask and stay safe," Manpreet concluded.