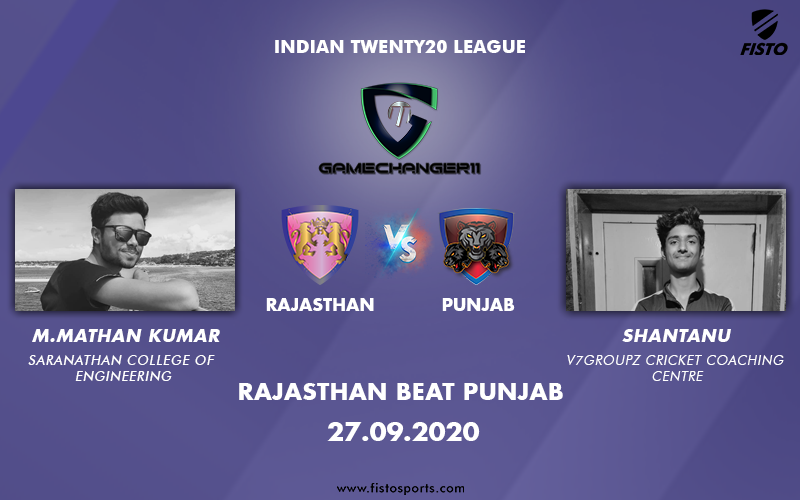 Rajasthan Royals made history with a phenomenal run chase against a strong Punjab side.

What was that game! Absolute bonkers. That's the beauty of T20 cricket. Rajasthan Royals (RR) snatch victory from the jaws of defeat literally, and script one of the most majestic performances in the history of IPL. I have gone through a rollercoaster of emotions, in its truest sense. I was stunned watching the match. Rahul Tewatia is an absolute beast! One minute down, the next minute up. After struggling to even dispatch the ball outside the 30-yard circle to pocketing gigantic sixes, Rahul Tewatia is the hero tonight. A magnificent 4 wicket victory for RR. A night to remember for them! The KXIP boys would be crestfallen.

An impressive powerplay up-front for KXIP in the first innings

KL Rahul and Mayank Agarwal of KXIP went all guns blazing in the powerplay of the first innings as they struck monstrous sixes and fours all across the ground at Sharjah, which is quite small. With 60 runs from 6 overs, this was also the second-highest Powerplay score of Dream 11 IPL 2020 so far. Interestingly the highest powerplay score of the IPL was in the same match (second innings) by Sanju Samson and Steve Smith.  Scoring 26 of 18 with 4 boundaries during the powerplay KL Rahul once again looked in absolute sublime touch and went on be ahead of everyone in the race for the orange cap (most runs in the IPL). Mayank Agarwal on the other hand who has a whole new look this IPL season in terms of runs and batting prowess struck 2 sixes and 3 boundaries during the powerplay. His score at the end of the first 6 overs stood at 29* (19). An absolute crazy batting combination!

The blitzkrieg from Mayank Agarwal

There is no dearth of runs for Mayank Agarwal in the domestic circuit. He's a stalwart of domestic cricket and has made a mark in international cricket as well, at least in the test format. The only place where he doesn't have a record to boast, is the IPL. But this season might just be a record-setting season for him. He is already had a match-winning knock in the first scoring 89, and now he's smashed a majestic hundred. His knock of 106 (50) was laced with 10 boundaries and 7 sixes. He smashed all the bowlers with disdain and steered KXIP to a humongous total of 223. The way he picked lengths and picked up the pace variations from the RR bowlers was commendable. Hopefully, this is just the start of a glorious IPL season for Mayank.

Tewatia, drama and a cricketing miracle

Prior to that onslaught, Rajasthan Royals required 51 off 18 deliveries – they've won with three balls to spare 🤯 pic.twitter.com/nglADX3PJn

Twitterati, cricket pundits, former cricketers all were lashing out at Rahul Tewatia for his slow-paced innings. He was at a time, 8 of 19 deliveries and was being heavily criticized for slowing down things for RR and gifting the match to KXIP. The platform set by Steve Smith and Sanju Samson was good enough for a win. Of course, there was a lot of fighting to do but Tewatia's knock almost made things impossible for RR. But then came a dramatic turn! 17th over and 51 needed off 18 balls. Sheldon Cottrell bowling go Tewatia and all people expected him to do was to give the strike to Robin Uthappa. But Tewatia had other things in mind. Surely, Cottrell was unlucky enough to face the brunt of Tewatia’s frustration which was built up for quite some time. He smashed 5 sixes off that over and changed the scenario. 5 sixes! Hard to believe right? He emerged as the hero and put a lid to the mouth of all his haters. Some crazy level batting!

We had an exclusive conversation with M Mathan Kumar of VSP academy, Trichy and Saranathan College of Engineering and he said that RR should chase as Punjab's batting had a lot of depth. Absolutely bang-on analysis! Punjab did plunder a mountain of runs and RR won it by chasing. He also opined that RR would be bolstered by the addition of Buttler but the Englishman departed after scoring a single digit. But his presence wasn't missed as Sanu Samson and Steve Smith played some stellar knocks complemented by Rahul Tewatia's unbelievable knock which made everyone bow down to him. I mean 5 sixes off the 17th over when the entire equation looked impossible for RR!! This is bound to be something special!

We had an exclusive conversation with Shantanu of V7Groupz cricket coaching centre and he made a very good point when he talked about the dimensions and size of Sharjah. Sharjah cricket stadium is very small and naturally, there were raining sixes. It was run-fest as Mayank Agarwal scored a sublime century (107) while KL Rahul played second fiddle. KXIP plundered 223 runs as the batsmen were simply toying around with the bowlers. Shantanu also opined that the middle order of KXIP will play a crucial role but the brilliance and destruction of the openers of KXIP didn't let the middle order do much batting. However, Nicholas Pooran flexed his Caribbean muscles as he scored a quickfire cameo of 25 balls off just 7 8 deliveries. His small fiery knock included 3 sixes and 1 four and he had a blistering strike rate of 312.5.

Man of the Match: Sanju Samson

Is this one of the best run chase ever in the T20 cricket?