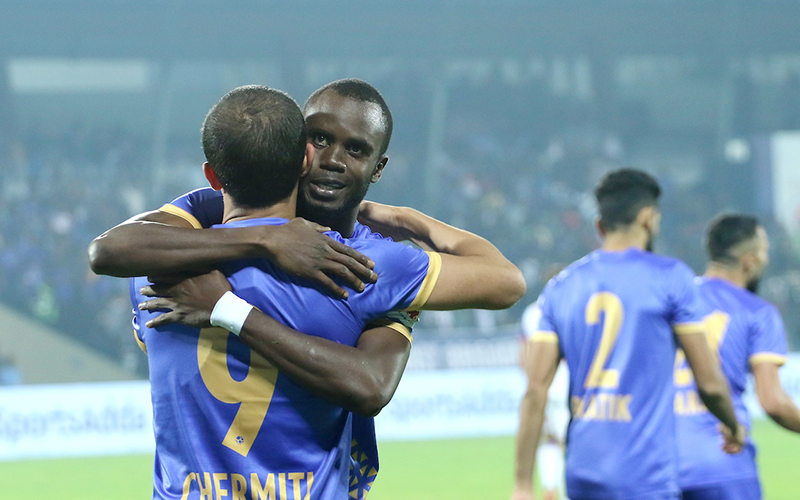 Modou Sougou: "We either kill Chennaiyin or get killed"

Mumbai City FC will play the last league game of the 2019-20 Hero Indian Super League on Friday and a win would ensure that the Islanders qualify for the playoffs for the third time in the club's history. Their opponents, Chennaiyin FC find themselves in a similar situation - a win for either of the teams and they are the fourth and final side to qualify for the semifinals.


Mumbai City FC are recovering from a tough away loss against table-toppers FC Goa and will be eager to clinch their playoff berth in front of their home fans. On the other hand, Chennaiyin FC have been on a fine run as they remain unbeaten in their last six matches and are coming out of a huge away win against ATK.


Senegalese forward and Mumbai City FC's all-time top goalscorer Modou Sougou has been instrumental this season for the Islanders with three goals and two assists and is confident that his team will make it to the play-offs. “It is a final for us. This is the most important game for us in the season, it is all or nothing. We either kill Chennaiyin or get killed. It is a very crucial game for us. I’m confident we will come out on top”


Talking about how they would defend a free-scoring Chennaiyin FC, he said, “We need to win this game and Chennaiyin need to win it as well, both the teams are under pressure. We have one choice - three points, nothing less or nothing more. In the last five games, they have been the best team in the ISL. They are a very different side right now from the last time we played against them, we know that and we are confident we can restrict them and qualify. We are ahead of them in the points table, which shows we have quality too.”


A familiar face will be making a return to the Mumbai Football Arena in the form of Chennaiyin FC captain Lucian Goian, for the first time after he parted ways with club at the end of last season. The 35-year-old who played with Goian during the 2018-19 season said, “It will be a special night for Goian, he did well here in the last three seasons but life goes on. The players move on but the club remains. That is football."

"I hope the fans too receive him in a nice way and I’m sure he will be happy to come back to Mumbai. But I'm hoping he won't be too happy when he's returning back to Chennai", quipped Sougou.