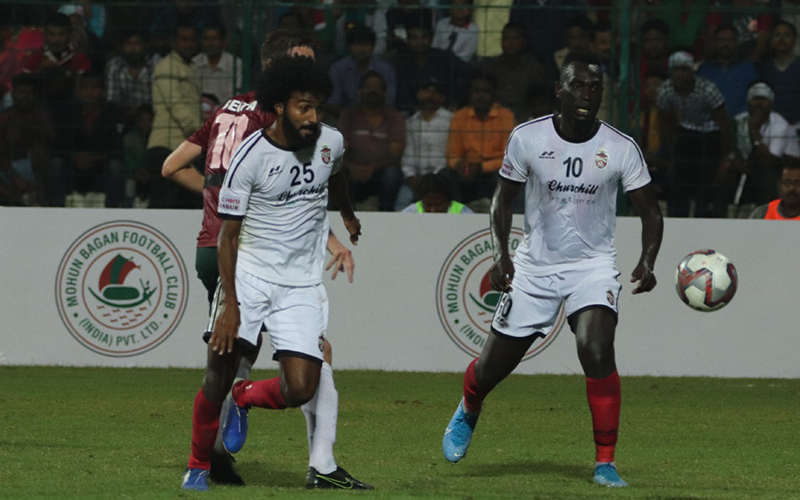 Spaniard Fran Gonzalez scored his 10th goal of the season, converting a penalty successfully, to go on top of the scoring charts, while compatriot Joseba Beitia and Senegalese striker Papa Babacar Diawara also found the net for the Mariners. All four goals in the match came in the first half with Nigerian Joel Sunday getting one back for the home side.

This was Bagan’s seventh win on the trot and extends their unbeaten run to 12 games. It also takes them to 35 points after 14 games, helping to open up a healthy 13-point advantage over second-placed Punjab FC. TRAU, with 16 points from 15 games, remain locked in a relegation battle with city rivals Neroca FC and neighbours Aizawl FC.

Both Bagan and TRAU made three changes to their line-up from their previous games. The Green and Maroons left out three defenders — Daniel Cyrus, Gurjinder Singh and Ashutosh Mehta, and brought in Lalramchullova, Dhanachandra Singh and Komron Tursunov in their place. TRAU began with Premjit Singh, Patrick Uche and Dhanachandra Meetei in place of Shahabaaz, Loken Meetei and Nigerian striker Princewill Emeka, who had started their previous game against Quess East Bengal.

As has been the norm in recently, Bagan took an early lead when Komron Tursunov was adjudged to have been tripped inside the box by Dhanchandra Meetei. Gonzalez converted the resultant penalty with consummate ease.

In the 22nd minute, Dhanachandra passed the ball to Beitia just outside the TRAU box on the Bagan left flank. As Nongdamba Naorem made a dummy run to his left, Beitia played a wall-pass with Suhair to his right to get closer to the box. The ball made its way back from the forward to Beitia, who met it with a delightful right-footed curler which flummoxed Sayan Roy in the TRAU goal and bulged the net.

Just a minute later, Tursunov got himself involved in the third goal as well, this time picking up the assist to put Papa Diawara on the ball inside the TRAU box. Holding off his marker with ease, the former Sevilla striker struck for the eighth time in eight games with a delectable finish across the face of Sayan Roy’s goal.

Three down in the first 25 minutes, TRAU fought back admirably and Niger recruit Joseph Mayowa was behind at least three clear scoring chances that the home side created in the next 15 minutes.

They managed to score off one of them only, when Mayowa took advantage of an error to surge ahead. Once inside the box, he got past Fran Morante and also keeper Sankar Roy. The ball deflected off Morante’s heels and looped up for Joel Sunday, who put it inside an empty net for his first goal of the season.

Bagan began the second half with a clear intention of sitting back and holding on to their two-goal advantage — leaving it to TRAU to make the play.

The hosts did try their best. Naocha had a shot in the 68th which was easily collected by Sankar and later in the game, he also got a header on target. Deepak Devrani rose to connect a header towards goal, but they were all too easy for the Bagan custodian to collect.

Tursunov was given the marching orders for a second bookable offence with the clock a minute shy of the 70-minute mark as Bagan were forced to play out the last 20 minutes with 10 men as a result.

Nothing, however, changed TRAU’s fortunes on the day and Bagan held on without further fuss. Joseba Beitia, for his third goal of the season to go with eight assists, was declared the Hero of the Match.