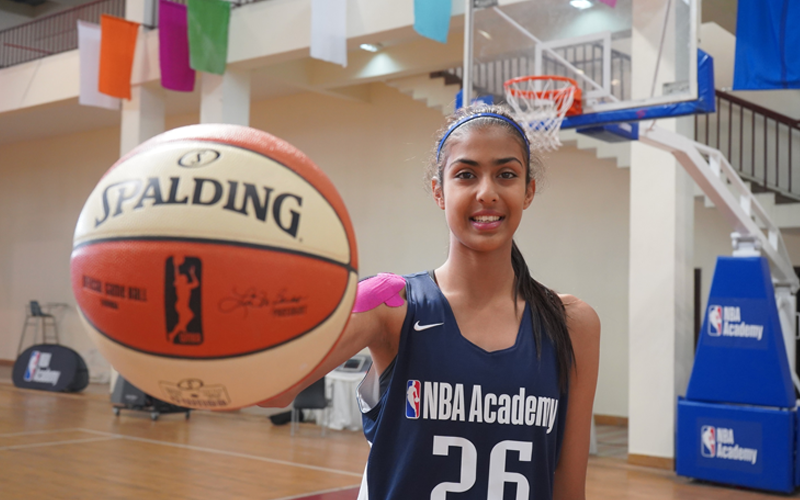 On the eve of International Mother’s Day, student-athletes from the NBA Academy Program talk about their mother’s role in their journeys till date.

Amaan Sandhu is from the first batch of student-athletes of The NBA Academy India. With both his parents having played basketball in their heydays, Amaan’s big break in 2017 should have made their hearts swell with pride. But his mother Rajinder Kaur Sandhu’s bout with depression then made it difficult for Amaan to make a choice.

“It was a difficult phase for the family and though I would have liked to have Amaan by my side, I knew The NBA Academy India would give him the right platform to make a career in basketball,” recalled Rajinder.

In the last three years, Amaan’s ensured his mother’s sacrifice was worth it. He made rapid strides, traveling the world for basketball but gives his mom the due credit. “She is my real-life superhero. She never let her personal difficulties come in the way of my career,” said the 17-year old on the eve of International Mother’s Day.

Harsimran Kaur admits that her mother Sumanpreet Kaur’s experience as a former national level volleyball player helped her in her formative years as a cager. The foundation of Harsimran’s journey to become the first female player from The NBA Academies Women’s Program to be invited to The NBA Global Academy was laid by her mother.

Sumanpreet recalls how she put Harsimran’s needs before everyone else’s to ensure her progress was smooth. “A full-time job and supporting a full-time basketball player called for lots of adjustments. From ensuring a good diet to taking her for practice, it was a team effort with my husband and since we both had played sports, we understood the demands and put her needs before ours,” said Sumanpreet.

In Allahabad, Shimla Yadav is fighting social stigma till date to ensure her daughter Vaishnavi doesn’t face any hurdle in her basketball career. “Initially I was afraid to allow Vaishnavi to play because in our home town, girls stepping out of home are subject to a lot of criticism,” recalled Shimla. But at the 69th Junior National Championship in 2018, Vaishnavi scored a record 71 points, the most by a women’s player at the national level. A month later, at the first-ever NBA Academies Women’s Program in India, Vaishnavi shared the MVP honors with Sanjana Ramesh. That year turned the tide. “It took me a lot of time to accept myself. But the day she started to excel, I decided to back her to the hilt,” said Shimla. The 18-year-old last year committed to Pensacola State College, Florida. “It is because she braved those odds that I got to the US to pursue my dreams,” Vaishnavi said. The NBA Academy India alum Jagshaanbir Singh who committed to Point Park University recently minced no words in calling his mother his pillar of strength. “When I was out due to an injury, she kept talking to me about making a strong comeback. I wouldn’t be where I am today without her love, support and care,” Jagshaanbir said.

Mother Baljit Kaur Jhawar exactly knew what Jagshaanbir needed; a dose of confidence. “When Jagshaanbir started playing basketball, he used to be scared of getting injured. We knew that he had the height and the talent, but he had to play freely on the court. That was an important phase as we kept speaking to Jagshaanbir to overcome his fears,” said Baljit