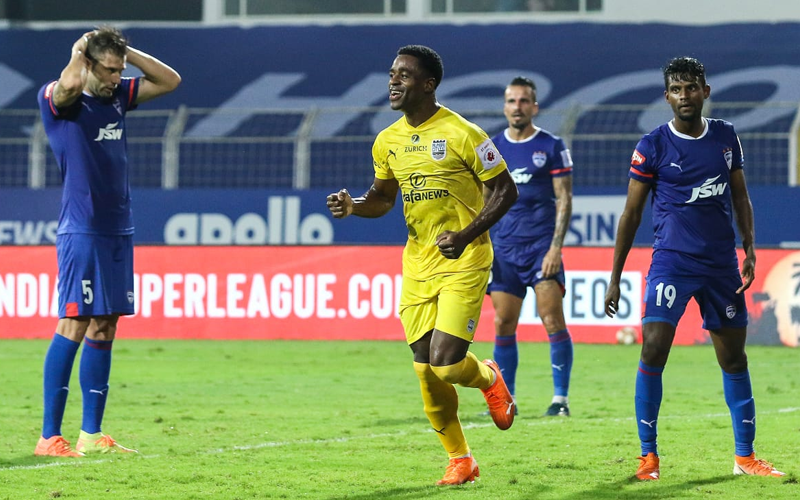 Goals from Mourtada Fall (9'), Bipin Singh (15') and Bartholomew Ogbeche (84') helped the Islanders remain unbeaten in their last eight games and climb to the top of the Hero ISL table. Sunil Chhetri (79’) scored late but it wasn’t enough to rescue BFC, who have now suffered three straight league defeats for the first time ever.

Bengaluru made just one change from their previous encounter as Deshorn Brown came in to replace Erik Paartalu while Mumbai coach Sergio Lobera named an unchanged XI from the 2-0 win over Kerala Blasters.

BFC squandered an early chance when Brown was set through on goal, but with just the keeper at his mercy, the 30-year-old fired over the crossbar.

Unlike BFC, Mumbai didn’t miss their chance and took the lead in the ninth minute. Bipin's looped corner was headed across the goal by Hernan Santana. Fall leapt highest to nod the ball into the net. This was Fall's tenth goal in the league — all of them headed — and he is just one goal away from equalling Chhetri’s record of 11 headed goals.

Lobera’s men nearly doubled the tally soon. Ahmed Jahouh chipped in for Bipin on the right and the latter cut it back for Adam le Fondre in the box. The Englishman's shot though was deflected off target.

But it didn’t take long before the ball found the back of the net again. The second was a perfect team goal which saw Santana and Le Fondre combine to find Mandar Rao Dessai on the flank. The full-back whipped in a perfect cross for Bipin, who timed his run to get past his marker and score the team’s second goal.

Mumbai were brilliant in attack while their defence was good enough to keep BFC at bay. Keeper Amrinder Singh did well to keep Cleiton Silva’s free-kick out of goal with a diving save as Mumbai maintained their two-goal lead at the break.

Mumbai City were unlucky to concede a penalty in the 78th minute when Silva was challenged in the box by Fall. Though the Senegalese appeared to have won the ball, the referee pointed towards the spot. Chhetri kept his composure and scored.

In the 84th minute, a howler from BFC keeper Gurpreet Singh Sandhu restored Mumbai’s two-goal cushion. Ogbeche nodded in a Cy Goddard corner, which Gurpreet fumbled and let in. There was late drama as Jahouh received his marching orders for the second time this season, following a second booking in the match.