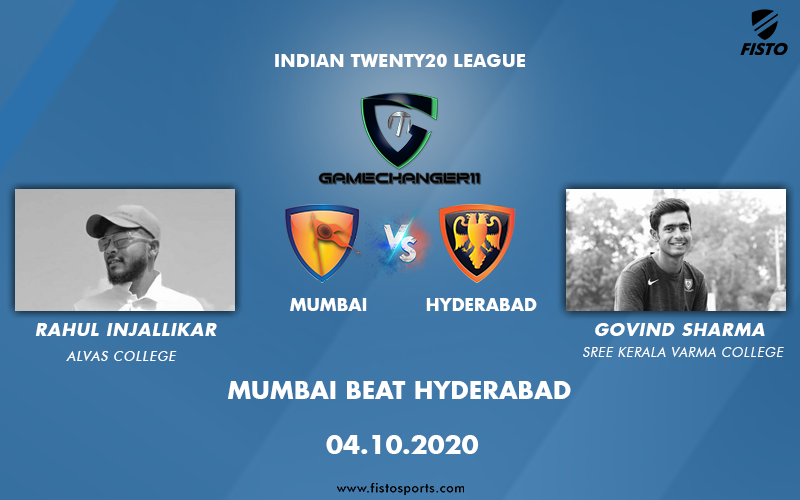 Mumbai Indians displayed their superiority with a solid team performance to beat Sunrisers Hyderabad by 34 runs at Sharjah. With this, they became the first team in this year’s IPL to restrict their opponents below 200 at the Sharjah Cricket Ground. The bowlers bowled as a unit and pushed them to the top spot with 6 points in five matches and a better Net Run Rate compared to Delhi Capitals and Royal Challengers Bangalore.

Rohit Sharma won the toss in the day-game and had no hesitation to bat. They went with an unchanged eleven whereas David Warner had two chances in the team. Bhuvneshwar Kumar was injured, and they also replaced Khaleel Ahmed to bring in two other pacers in Sandeep Sharma and Siddharth Kaul.

SRH had a dream start when Sandeep dismissed Rohit Sharma in the first over. However, Quinton de Kock looked in touch and started playing confidently once he was set. He held the innings at one side as Surya Kumar Yadav also did not last long and was dismissed for 27. Ishan Kishan continued his good form as he and de Kock added 78 runs before de Kock was dismissed for 67 by Rashid Khan. His innings was decorated with four boundaries and four sixes. Kishan was also dismissed in the next over and from their MI’s power hitters took control of the game. Hardik Pandya (28 off 19) and Kieron Pollard (25* off 13) ensured some big overs for MI but Krunal Pandya played an unbelievable cameo. Coming to bat with only four balls remaining the senior Pandya hit 6, 4, 4, 6 to add 20 runs in four balls and took MI to 208.

Among SRH bowlers, T Natarajan again delivered a brilliant performance. Conceding just 29 runs in 4 overs at Sharjah is a huge credit and ensured that MI batsmen could not run away with it. However, the other two seamers were quite expensive. Sandeep and Siddharth picked up four wickets between them but conceded more than 100 runs in their 8 overs. Rashid Khan was steady to finish with 1/22 in his 4 overs.

It was a tough target for SRH, especially keeping in mind their relatively inexperienced middle order. A good start was essential, but Warner and Jonny Bairstow could add only 34 runs before Bairstow was dismissed for 25 by Trent Boult. Warner and Manish Pandey added 60 runs in less than 6 overs but Pandey could score only 30 before being dismissed by Pattinson. Kane Williamson had another failure and even Priyam Garg was also dismissed for a single digit. All the MI bowlers bowled brilliantly led by Boult who also picked up the key wicket of Williamson and finished with the man-of-the-match award.

Warner reached his first fifty of this year’s IPL and with more than 70 required in the last 5 overs, he was the last hope for SRH. But an outstanding catch from Ishan Kishan off James Pattinson ended his innings and virtually ensured MI’s win. The youngsters Samad and Abhishek tried their best and Samad even hit two sixes. However, the MI bowlers were much more experienced and skillful to maintain control and pick wickets at the required moment. Eventually, SRH finished 34 runs behind with all three pacers of MI, Boult, Pattinson, and Bumrah finishing with two wickets apiece.

MI are looking stronger in every match and with de Kock back to form there is no reason for them to change their combination. SRH clearly missed Bhuvneshwar and would hope for his speedy recovery. They also need to sort out their pace bowling options and may think of bringing Billy Stanlake in future matches in place of Williamson or Bairstow.

Rahul Injallikar of Alvas College correctly highlighted the MI strong areas like their bowlers and middle order. Boult and Bumrah bowled brilliantly. Similarly, the power-hitters Pollard and Pandya brothers were on the money and played important cameos. He also identified the lack of experienced players in SRH middle order as a concern area for them and rightly it was shown during a tough chase.

Vathsal Govind Sharma from Sree Kerala Varma College rightly predicted a high scoring match. However, he hoped for an SRH win and a strong performance from Kane Williamson. However, Williamson was foxed by a slower bouncer from Boult was dismissed for just 3 runs which created lots of trouble for SRH in their chase.

Will MI finish top of the points table?