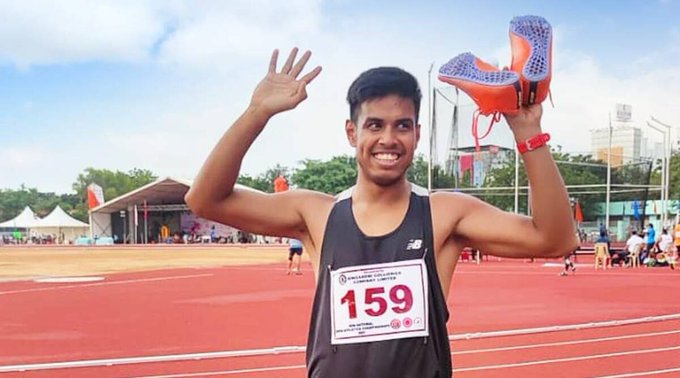 Two youngsters, Assam sprinter Amlan Borgohain and Tamil Nadu Triple Jumper Praveen Chithravel, shared the limelight with the experienced Rajasthan Hammer Thrower Manju Bala Singh as each of them climbed the podium with career best efforts on the final day of the 60th National Open Athletics Championships here on Sunday.Amlan Borgohain clocked a sensational time of 20.75 seconds, the second fastest time on Indian soil, to win the men's 200m final in great style. Only Muhammed Anas Yahia (20.63), Dharambir Singh (20.66), Arokia Rajiv (20.66) and Anil Kumar (20.73) have run a faster time over the distance in the history of Indian athletics.The 23-year-old, who has lived in Hyderabad since 2014, was running his first 200m competition at the National level in 20 months, burst out of the blocks and sped ahead of the pack to break the beam in 20.75 seconds. It was not only the first time that Amlan Borgohain stopped the clock inside 21 seconds but also a New Meet Record.The 20-year-old Praveen Chithravel, whose previous best of 16.51m came on March 16, 2019 and the best this year was 16.39m achieved in Patiala on March 19, nailed the Triple Jump gold medal with his opening try over 16.88m. He is now third on India's top list in hop, step and jump behind Renjit Maheswary (17.30m) and Arpinder Singh (17.17m).