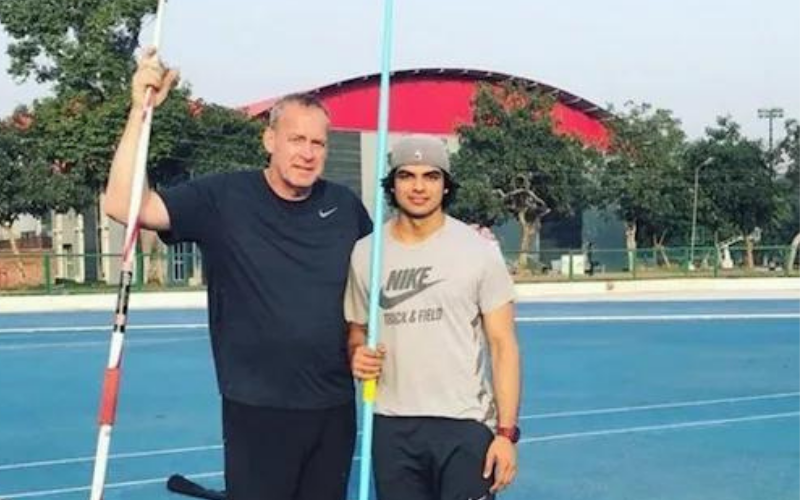 Uwe Hohn, the German great hired in 2017 to coach javelin star Neeraj Chopra, has been sacked by the Athletics Federation of India.

The Athletics Federation of India (AFI) on Monday announced the end of its association with national chief javelin coach Uwe Hohn, saying it is “not happy" with his performance and will hire two new foreign coaches soon. The contract of the 59-year-old German, a former world record holder, was valid until the end of the Tokyo Olympics.

“We are bringing two more coaches and we are changing Uwe Hohn as we are not happy with his performance. We are looking for a foreign coach for Toor (shot putter Tajinderpal Singh Toor)," said AFI president Adille Sumariwalla. Sumariwalla was speaking during a press conference at the end of a two-day executive council meeting of the federation that was also attended by AFI planning committee chairman Lalit K Bhanot and vice-president Anju Bobby George. Hohn was appointed as chief coach in November 2017 for one year to train the likes of Olympic champion Neeraj Chopra and two other Tokyo Olympians in Shivpal Singh and Annu Rani. Chopra was under his tutelage during the Commonwealth and Asian Games in 2018 before another German Klaus Bartonietz took up that role.

Hohn had kicked up quite a storm before the Olympics by claiming that he had been blackmailed into accepting his contract by the Sports Authority of India and AFI. Both the bodies had rejected the charge. A host of issues were discussed in detail during the meeting here, including redesigning the AFI’s junior (grassroot development) programme, introduction of build-up tournaments for top international events such as the world championships and the Olympics and radically refurbishing its coaching programme, especially for the juniors. “To reach the next level, we have to redesign the junior programme, how to do talent identification better to improve it further, we held discussions with athletes and coaches, both former and present athletes from all states," Sumariwalla said.

One of the conclusions of the meeting was that the athletes need more tournaments in the run-up to marquee global events. “Athletes need more competitions, this is mainly for seniors to prepare for larger competitions. Next year we have a tight calendar — with the World Championships, Asian Games and Commonwealth Games.

“Athletes need competition in preparatory period so that their bodies remain in good nick. So the plan is to introduce build-up competitions at the zonal level so that athletes don’t have to travel far." Going by what the AFI said, the coach education programme is also set to see a complete overhaul in the coming times, with the introduction of a certification course involving the sport’s global governing body, World Athletics. “We have decided to bring in foreign caches in junior too to strengthen their foundation and basics.

“Apart from inter-district, we have to identify pockets in every states, how to bring them, what should be the parameters…Also, there will be an open national event for the next five years in Jamshedpur." “We need experienced coaches who have produced world champions and Olympic champions, with all the latest knowledge. Our coaches will also work alongside the foreign coaches. “In last one year we have already developed 650 coaches and 1500 in pre level across various levels.

On the upgradation of the coaching programme, he added, “We will start with grassroot as once foundation is strong, elite will automatically get stronger. “This is a World Athletics course and they will award the certificates. Those coaches are for our identified events — 400m, walk, javelin, long jump and triple jump.

“There will be a different set of coaches for junior and senior athletes. We have recently identified Kerala, Karnataka, Punjab, Rajasthan and Haryana." During the meeting, the AFI brass analysed the areas where it did well and also tried to identify the ons where it didn’t and the reasons for it. “A coaching education programme has started, we need at least 5000 level one coaches if we wish to cover 500 district.